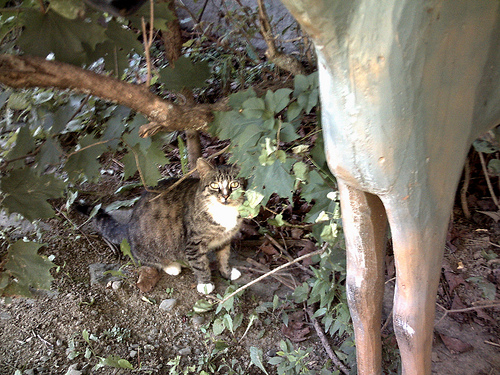 My fingers on both hands are cracked, split and bleeding, which makes everything ouchy. Every muscle in my upper body is complaining. I banged my elbow on the edge of a door and it's grown a bump. Sleeping on it is murder. Moving ain't for wimps! For a solitary moment I considered letting the movers do everything that was left. But that would be prohibitively expensive, and anyway part of the process of packing lies in deciding what to keep and what not to keep.

I'd intended to spend a long day at the old house yesterday, loading up enough boxes for the whole rest of the week, so that when I dropped by in the evening, all I would have to do is load up the car and leave. But something happened to change my plans.

For three days after the storm, I didn't see her. On Friday, she appeared just as I was about to leave. I put out a can of food for her, no tricks, I figured she must be pretty hungry and had no desire to hassle her.

Then on Saturday, she showed herself as soon as I arrived. She still seemed pretty hungry. Again, I wasn't going to trouble her, but then I thought, "We have the whole day. If she still won't go in to the carrier I'll take the food out of it before I go."

So I brought the cat carrier out and she watched me put the food inside of it. I went out front and continued shoveling (more on that later) and when I looked up she appeared to have gone into the carrier! I crept up as quietly as I could, but snow crunched under my feet and she scooted out onto a drift, looking at me.

I went inside. As I watched through the window, she padded down and walked right into the carrier, and appeared to be quite engrossed in the food.

I had left the doors ajar, so as to sneak out soundlessly. It worked. Only her tail was sticking out of the carrier door (which is made of metal bars). I leaned out and slammed the door shut, and put the lock through the hasp! Tiger Grumpyface freaked. She jumped onto the plate and yowled at me. But I had her!

I felt bad, though, that it had happened right at the start of the day. I still had hours of work ahead. But I resolved to cut it short and leave by 2:30 so that there would still be an hour or so of light when we got home. I left the carrier where it was, and she yowled at me every time I walked by before finally settling down.

She was better about the ride in the carrier than any of the other quats have been. When we arrived, I put the carrier under the deck, which has become Tiger Whitestockings's official way station.  I made sure that there was food right in front of the carrier door. When I unlocked it, there was a brief pause from inside, rather like a storm brewing -- then Grumpyface shot out at about mach five, past the food, around the corner of the house and out of sight. I was afraid that she would run away. But half an hour later, as I was unloading the car, I looked through the slats and found her coiled in a clear, dry corner, glaring out at me with a very Grumpy look on her face indeed. "Baleful" would be the appropriate word.

This morning she was gone. But perhaps, like Whitestockings, she will be back tonight. I've done my part. All I can do is make sure that there is always food in the same spot, and hope that she will grow a brain cell or two.


*
On Wednesday, getting the place accessible for the movers was a big part of my worries. I stopped at the local market and found a number for someone who did plowing. But a big load was taken off when I pulled into the driveway and saw that it had already been plowed! A lousy job, but why look a gift horse in the mouth? It was good enough. My guess from the big tractor tire marks is that it was the handiwork of my brother-in-law. Nice of him.

So, a big part of my trips out to the old house this week has been taken up just by shoveling snow. The movers plan to use all three main doors on the house, plus there's stuff in the big barn. It all had to be cleared. I took it a step at a time, going inside to do lighter work when I got tired.

Now -- why is it that things disappear during a move? I'm missing things. As an example, I can't find my Three Stooges DVDs or the second season of The Wild Wild West. It's not like there could have been any light-fingered moving men, because I'm the only one! Is there a vortex whose opening is triggered by the moving process? Everywhere in the world, whenever anyone moves, does the vortex open and suck random objects right out of your boxes and into a parallel universe where the missing things drift aimlessly through time and space?

I spent New Year's Eve unpacking in the new house, barely aware of the event. Upstairs, in my bedroom, I tuned the teevee to Times Square -- I've no idea which network -- and noted that only twenty minutes remained in the detestable, loathsome, hurtful and miserable year of twenty-ten. I walked down the hall to what I am calling the Studio bedroom and unpacked DVDs for what felt like about ten minutes. But when I wandered back up the hallway the countdown was at five -- four -- three . . .

I've never felt so detached from a New Year's celebration. I watched the ball drop and the crowd go wild. I watched couples frenching each other in the street. I watched the confetti fly. I watched for about thirty seconds. Then I turned off the set and went back down the hall to do some more unpacking.