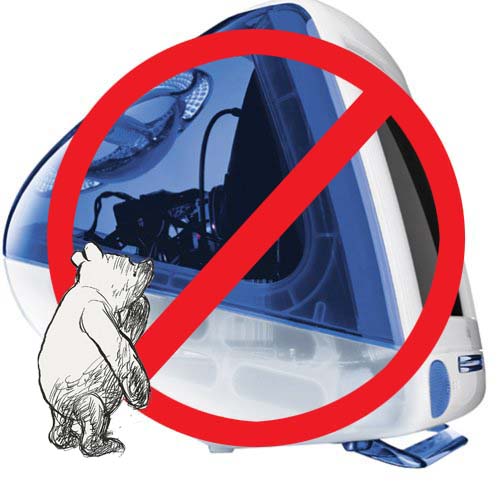 It never rains but it pours! Last night my original Imac, which has served me faithfully for more than a decade, finally went the way of all computers.

The good news is, I've been such a slacker over the last couple of years that I don't stand to lose much of importance, except possibly a chapter or two of my novel-in-progress. My fingers are crossed on that one. I hope I backed it up to disk sometime in the last year and a half. . . otherwise I'll be retyping the first three chapters from hard copy and trying to reconstruct the rest. With the mood I'm in now, that latter little thing isn't going to happen anytime soon.

The bad news is, I have to buy a new computer. In fact, I've just done it. I was especially concerned about the new software that I would have to buy, but it turns out that working at a college, even in a staff support position, has its benefits. I received a hundred dollar discount on Word, and -- get this -- a THOUSAND dollar discount on Adobe Creative Suite.

Let me type that again:

A THOUSAND smackers! That's real folding money to me.

Without the discounts, I wouldn't have been able to get out of this mess for less than three thousand dollars. Instead, it's significantly under two. Not that that isn't bad enough!

I thought my IMac was great and would have stayed with it, but, honestly, the new one should be better for me. The software was so outdated on the old machine that most websites crashed it. I'm not even sure that it would have been able to handle the DSL in the new home. I'll be able to blog from my own study! Up until now, the best I could manage was to write a post at home, email it to myself at work, and post it from there.

I'll be able to say that I'm up to date in my software and design skills. And I'll be able to take a moonlighting job doing some typesetting. I guess it was time: a new computer for a new era in a new place. But if you've been following this blog, you know how I hate to let go of anything. Even a computer.

I just hope I have enough money left over to buy a clothes washer/dryer for the new house! The laundry is starting to pile up. . .