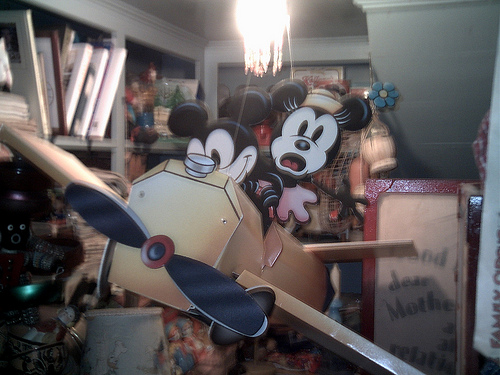 On the last day that the auctioneers were taking my mother's house apart, we finally opened the door to the pantry, which had not been opened (it had not been possible to open it!) in at least a decade.

Inside was an Oasis. Books and collectibles that I had forgotten about, old tins and even unopened food products. Hanging from the light was the in-store display piece pictured above, depicting a scene from the Mickey Mouse cartoon Plane Crazy. I think Mom got it because she was friends with the manager of the Portland Disney Store -- she was certainly a good customer there!

I would not let the auctioneers take it. I figured it wasn't worth much, and it was a spectacular reminder of the Wonderland that my mother had created in her house. I hung it over the dining room table, so that I would have something to make the empty house feel like home.

It's quite large, so it was a tough job fitting it in the car and still loading up with other things. But on Monday night I brought it back out to the All-New, All-Different DuckHaus with me, and on Tuesday night, after a nicely relaxing evening making and eating a pizza and watching Pioneers of Television on PBS, I hung it up again over the dining room table, where it now belongs.

It looks great there, even better than it did in the old house.

Every little thing that I do in the new house makes it feel happier, homier. Every book that I unpack marks the place as mine. I've begun putting my mother's collection of seashells out in the bathroom. It's starting to be good.

But then, settling in has never been a problem for me. Anywhere I go, anywhere I work, I mark places to make them mine.

I am thinking about using some vacation time next week, if the weather improves, to really bang away at the old house and git 'er done, so that by the end of January I can put it behind me, and sever the connection forever. That would be a good thing on so many levels. The old house is nothing more than a millstone to me now. Heating two houses is incredibly expensive. It's time to make it a memory.
Posted by Freder at 10:00 AM

Email ThisBlogThis!Share to TwitterShare to FacebookShare to Pinterest
Labels: moving, starting over