"You're maudlin and full of self-pity. You're magnificent." 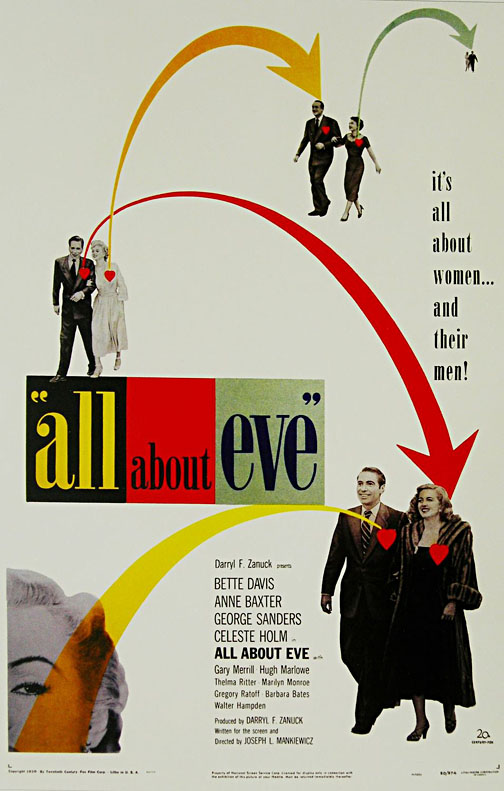 I knew it only from the clips of Betty Davis's famous line, the clip they always show, as if, foolishly, it was the only memorable scene in this very memorable movie. But last night Fox ran All About Eve, and at last I know what I was missing.

I'm not a fan of voiceover narration, belonging to the school of "Show me, don't tell me," so the opening scene went badly for me, and I thought, "This is All About Eve? This is the great classic?" But then Anne Baxter rose to accept her award, and in her eyes was a horrible reptilian gleam, and I knew I was in for that bumpy night that Davis keeps on warning us about. Once the awkward freeze frame passed, and the story began, the movie began to take hold.

Eve Harrington is one of the great monsters of screen history, right up there with Dracula and Imhotep. Baxter is masterful in the part, giving us just enough so that we can see her movements, like an alligator coiling through the swamp. It's part of the pleasure that we can see it coming when no one in the movie suspects; not even Bette Davis's Margo Channing, until it's too late. Only George Sanders's urbane Addison DeWitt has her number from the start, and when he finally opens up on Eve near the end of the picture, it's a scene that's both triumphant and repugnant.

This picture is what they mean when they say, "They don't make 'em like that anymore." They can't. Let a writer drive a movie these days? It's unheard of. Even if it happened, nobody in Hollywood is capable of writing dialogue like this anymore, where almost every single line is both quotable and perfectly rendered for the characters and situations. It's not a coincidence that imdb.com has an entire, lengthy page of quotes from the movie; All About Eve features some of the most exciting writing I've heard from a movie in years and years. "What a story! Everything but the bloodhounds snappin' at her rear end."

In her early forties, Bette Davis is as magnificent as DeWitt proclaims her, half harpy, half goddess and all woman. It's easy to see why Gary Merrill fell for her during the making of this picture, and she makes a man envy Merrill for this part of his life.

(In later years, Merrill lived alone in a lighthouse near Cape Elizabeth, Maine, the town I grew up in. We drove past the place once, and my parents pointed out that this was his home, "He was married to Bette Davis." That was his claim to fame. He still worked occasionally; I remember his appearance on an episode of Kung Fu. I "met" the man years later. He came to the bookstore I was working at to sign copies of his new autobiography. He was friendly and polite. No one came to speak to him or to buy his book. No one. I felt so badly for him. He looked sad and lonely. Had I been then the person that I am today, I would have spoken to him, asked about the book and indirectly about his life. But in those days I was even more socially backward than I am today, and I minded my own business, only glancing once in a while at the forlorn old man behind the little table. He died the very next year.)

The actors all seem to know what a juicy script they have to work with, and they run with it. Celeste Holm has a marvelous moment when Davis says to her, "It's not as if you drained the gas from the tank yourself," and continues to be squashed by guilt in the powder room as Anne Baxter allows Eve to drop in and out of her various selves. So palpable are her feelings of guilt that the outburst of relief that finally comes is infectious, I found myself laughing with her. There are no throw-away characters or by-the-numbers scenes in this picture. Even Marilyn Monroe, in a bit part that any other actress would merely slink through, comes out with guns blazing, an up-market Eve in her own right.

I've always loved theater stories, but this one is probably the single classic of the genre. Wisely, Mankiewicz never shows any of the actors onstage. Their big performances come not on the boards, but in their lives.