"Why don't you do something to HELP me?!" 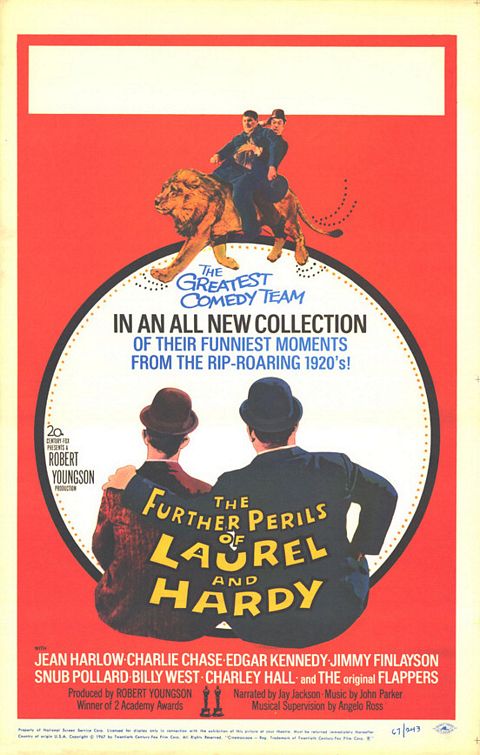 Many thanks to my friend FlickChick (who has a much more entertaining blog than mine) for the heads-up that TCM would be running a Laurel and Hardy marathon from Tuesday night into Wednesday. The parts of it that I was able to catch have easily been the best part of the last two days -- and they reminded me of something as well, the only perspective I've been able to maintain in the chamber of horrors that I've been trapped in during that time: Life is a Laurel and Hardy comedy: one nice mess after another.


It's better now. Really, the only real concern that I don't have an answer for at this point is that my friend Jean is in hospital and I hope she's doing well. The rest of it -- the nice messes that made up yesterday -- is all being worked on.

Let's start with the easy stuff. I still don't have a computer. On Monday they tried to deliver at the back door, so I left a note there the next morning. On Tuesday they instead tried to deliver at the front door. So on Wednesday I had notes on both doors -- when I got home and struggled up the stairs (more on that latter) I noticed that the note on the back door was gone. . . but there was no package!

And I still don't have telephone service. It was originally supposed to start a week ago Monday. When it didn't, I called from work and they gave me a new number, and a new date: yesterday. Yesterday came and went, and still no phone service.

Yesterday was also to be my moving day -- so of course the weather weenies were calling up a storm. They said that it would start after midnight and be terrible by morning. So I was overjoyed to wake at 7:00 AM and find that nothing was happening. Yippee! I thought. It's not going to be as bad as they predicted!

You can see it coming, can't you?

I drove out to Albion and loaded up the car while I waited for the movers to arrive. And waited. And waited. By the time I was finished loading, the snow had started to fall. Still no movers. I waited until after nine, then called the company and said, "Once again I am here and you're not!" The woman said that they were on their way, should be there any second, that they had left at a quarter after eight.

It took another ten minutes for them to arrive, and by that time the snow was beginning to get serious. It gathered on their boots and blew into the house -- all I could think of was the empty winter home in Doctor Zhivago. I helped them where I could, and kept their ramp swept clean, but the snow was coming down at the rate of an inch or two an hour and toward the end I had to stand out in the storm full time just constantly sweeping the ramp clear. That was miserable, but just as well -- I had managed to get through all of my weekend hours at the old house without tears, but yesterday I broke down several times. It was better to have a focus, even on a task such as that.

The downstairs went quickly enough, but upstairs there were four beds to take apart, and that was time consuming.

By the time everything was loaded and we were ready to hit the road, it was near one o'clock and there was probably six to eight inches of snow in the driveway. The moving van was stuck. My car was stuck. With much effort, we got out and onto the road -- which had not been plowed or treated in any way. It was a case of putting your tires in the tracks of the vehicle ahead of you and hoping for the best.

This was probably one of my ten worst winter driving experiences ever. It was white-out conditions all the way. For much of the drive, I could not even see the moving van just in front of me. The main roads were not much better than the town roads. The blower on my car was not working well enough to handle the cold, and I had to wipe down the inside of the windshield several times.

Once again, my plow guy had not been along. I was able to get most of the way into my driveway, but at the end it makes a sharp left turn and goes up an incline to the garage. With nine inches of snow on the ground, the car could not handle that, and I got stuck there again.

I went into the house, rounded up the cats and threw them into the bathroom, then grabbed my shovel and did the fastest job on the front walkway ever, only to have the movers suggest that they take the load back to the moving company with them and deliver it on Friday.

I wasn't going to have any of that. I asked them to do it right then and there.

Have you ever noticed that on any given working crew, there's always one guy who does less work than anyone else, and complains the loudest? This one went into full complaint mode. They off-loaded two and a half pieces of furniture and then flat-out quit on me. There was nothing for me to do but head inside and let the cats out.

The plow guy came along as I was shoveling out my car. He "helped" me in exactly the way that Stanley helps Ollie. He helped the car right off of the driveway and into the ditch, where it remains as I write this. I could not call Triple A because I had no phone.

Also, I could not drive to the store. I had meant to do that in the evening, after the move. I was low on some basic supplies.

So I walked. Three quarters of a mile one way to the supermarket, through the storm. What the hell, I was wet already, had been wet all day. The walk out wasn't so bad. The walk back was into the wind. The snow caked into my hair, my eyebrows, the whole front of me was white. My gloves were wet. By the time I was halfway home my fingers were so cold they were on fire.

When I got home I made the mistake of sticking them under the faucet. The pain as they thawed out was horrific. I laid down on the floor and screamed.

But it passed in about five minutes. I puttered around, unloaded the groceries, did my chores, then remembered Laurel and Hardy. With Stan and Babe and the cats for company, I made an early dinner (my only meal of the day) and wound down with a couple of drinks. By six o'clock it felt like eleven. I needed to get that day behind me. I went to bed early, leaving the dishes in the sink, and slept like the dead.
Posted by Freder at 11:49 AM

Email ThisBlogThis!Share to TwitterShare to FacebookShare to Pinterest
Labels: Laurel and Hardy, moving