Me and My SHADO 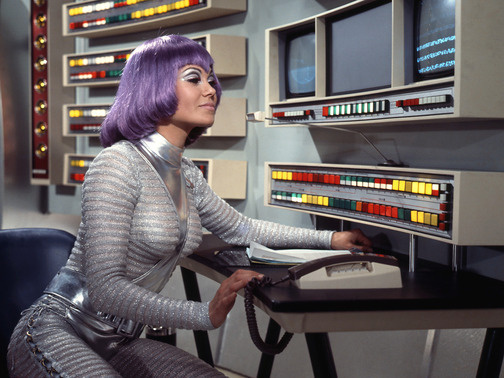 As you can tell from the photo above, Gerry Anderson's completely wonky '70s SF series UFO had just about everything a fourteen-year-old boy could want.

By today's standards, the show is almost laughably sexist. Although women are shown in command positions, it's rarely a higher rank than lieutenant, it doesn't come without frequent harassment from the self-styled lady's man Col. Alec Freeman (George Sewell, and an unlikelier lady's man you never will see) -- and just look at the uniforms they have to wear!

'Way back at the end of November, with Farscape behind me, I decided to revisit UFO for my Monday night dose of SF. With one thing and another, I've only managed to get a few episodes into the run. Oddly enough, it's the futuristic fashions (by Sylvia Anderson) that have aged the most.


Gerry and Sylvia Anderson are better known for their "Super-Marionation" puppet shows, Fireball-XL5, Stingray, and others, but UFO is very much in the same line as those shows, only featuring "live" actors (I have to use quotations, because sometimes I think the puppets displayed a broader range of expression than the cast of UFO!). To the Anderson's credit, it doesn't try to model itself on Star Trek or Lost in Space; its conceit is that Earth is under attack by humanoid aliens who harvest human body parts for transplant. Our only line of protection from the invasion is SHADO, a super-secret special ops branch that has its headquarters under a film studio, and brings the latest, most advanced technology to bear in its defense of the planet. Under the sea, on land, in the air, and from its base on the moon, SHADO seeks 'em here, seeks 'em there, seeks those aliens everywhere -- but still they get through!


The show is full of gadgets and flying things, and many of the effects hold up to this day; some of you already know I'm a believer that model work is more effective than CGI at just about everything. The alien craft and Skydiver (a submarine that launches a jet into the stratosphere) are particularly good effects.


As Commander Straker, Ed Bishop (an American actor who turned up a lot in British films) makes William Shatner's Captain Kirk look easy-going and lax. Bishop's whole performance lies in looking as steely-eyed and determined as possible. The series gets off to a rocky start with an episode that was so violent that it needed to be re-cut for syndication, and two more episodes that merely stick the shtick, all machines, all the time. But within three episodes Col. Paul Foster (Michael Billington) is introduced, and the scripts get markedly better as Foster is allowed to become the single three-dimensional continuing character on the show.


It's nowhere near as good as Star Trek or Farscape at their best, but the Andersons never scrimp on style, and most of the episodes hold your attention. But it's also very much a period piece, and a modern viewer needs a mental ride in the Way-Back machine to stomach some of the styles and attitudes on display.


It helps that I still have the mind of a fourteen-year-old boy.