Along the Lines of Moon Pitchers

For the first time in the five years since I moved into in the All-New Duckhaus, I can say that I am Fully Unpacked… at least, as unpacked as I am ever going to be.

This startling development came about because I am expecting a visit soon from my father and his wife. They will be staying nine days (which ought to be a real challenge for all concerned)… this meant that I had to get the guest room ready to receive customers. Before I could even think about vacuuming, I needed to get the boxes up off the floor. And as that’s the room where I keep the lion’s share of DVDs, I needed to get the closet space organized, too.

It took me probably three, three and a half hours spread out across two days to re-organize the whole lot and shelve five years’ worth of accumulated DVDs. During this time I was reminded of something that I knew, but don’t often think about: When you sort movies by the year of their issue, you create a timeline of your own life.

It’s not so noticeable when you’re working with movies that were made well before you were born. Unless you were passing through some significant event the first time you saw, say, Casablanca, or unless there’s some special memory attached, like seeing The Wizard of Oz in a movie theater on a big screen after a lifetime of watching it on television, the pictures made before you were walking on the planet constitute history, and are largely safe from associations.

But now that I am well into my middle years the films that were made in the last three decades of the twentieth century and beyond all carry memory with them. Yesterday, as I was sorting material that was made in the last fifteen years, I was able to look at the shelf and say, this is where Mom’s leg was amputated — this is where she died. Everything beyond that point represents a new life. The hard last years of her life occupy maybe a foot and a half along the shelf, along a timeline that extends back and back and is filled with other connections: this is where I started working at the newspaper, this is where I was dating such-and-such a woman, this is the last movie that all my friends and I went to and watched together.

We’re the sum of our experiences after all; and a life spent in the cinema is a life that can easily be retraced along a row of dusty old DVDs. I suppose the same thing is true with comics, which also tend to be sorted by their issue date rather than by such things as title or author or LOC. But I more or less stopped reading comics in the mid-eighties, by which time Marvel had been thoroughly ruined by a succession of moronic editors-in-chief… movies are the consistent path leading me straight through and beyond my comic-book-reading years, in both directions: here’s where I started drinking (the Gerry Anderson TV series UFO is, I found out, so much more entertaining when you are slightly soused). Here’s where Mom and Dad broke up. Here’s where I met my best, longest-lasting friends, one of whom left us here; here’s where I graduated from High School, and visited my cousins and grandparents in Minnesota for the last time.

The shelves are fraught with beginnings and endings. The movies don’t just belong to the people who created them: they are woven into our lives.

— Frede.
www.ducksoup.me
www.tarotbyducksoup.com
Posted by Freder at 1:50 PM No comments:

The Tarot of Mister Punch

My next Tarot project, The Tragically Comic or Comically Tragic Tarot of Mister Punch, is really very nearly completed. In fact I'm just waiting for the printed proof to arrive. My target on-sale date for this May 2nd. It's been a lot of great fun to make, and I hope it will be fun and informative to use. You can see this and all my tarot projects, including lots of boring written bits on how the decks came to be, at my tarot website, www.tarotbyducksoup.com. And this isn't the end, by any means! Stay tuned, Mystic Ones!

-- Frede.
www.ducksoup.me
www.tarotbyducksoup.com
Posted by Freder at 10:46 PM No comments: 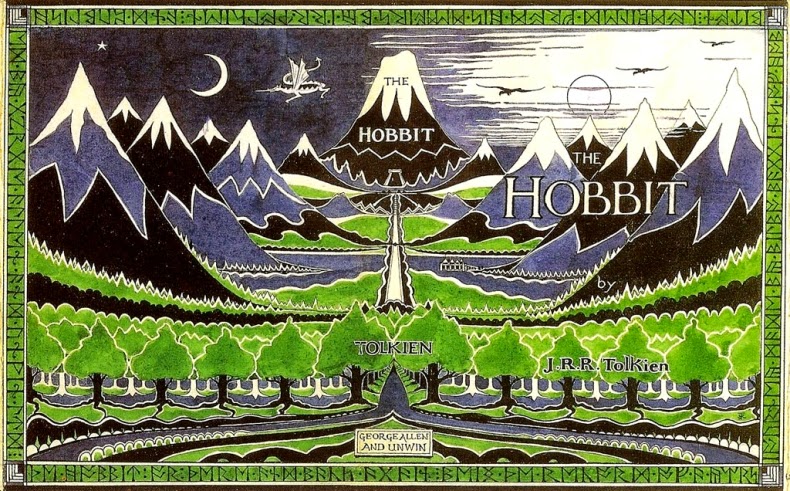 I’ve now seen, at long last, the first ten minutes of Peter Jackson’s first movie culled from Tolkien’s The Hobbit and some of his surrounding writings; especially the Appendices attached to The Lord of The Rings.

Why only ten minutes of the first film? Because I’m saving the rest of the movie trilogy for the first week of May, when my Dad and his wife come to visit from Out West. It’s one of the few movie-type-thangs that the three of us share an interest in, and it was the chance for us all to watch it for the first time, together, that justified in my mind the expense of getting in the digital HD versions of all three movies.

Having gotten the damn things in, I just couldn’t resist peeking. It’s only human — and Hobbit — nature.

My first impressions are as complicated as you might expect, if you know me. The movie has the feel of a terrific theme-park ride, and is a rich and vivid imagining of Tolkien’s universe as a whole; but as an adaptation of Tolkien’s little novel, his children’s tale about an awakening, Jackson’s Hobbit does real violence to the source material.

Tolkien’s novel starts out in a hole in the ground, and that’s a big part of the whole point. Mr. Bilbo Baggins is a provincial type, living with blinders on. All he knows of the world is what is in front of him: his village and his hole in the ground. Then, one fateful day, Something Happens. Something happens that makes Mr. Baggins suddenly realize that… there may be more to the world than he previously imagined.

Therein lies the whole point, the entire purpose of Tolkien’s The Hobbit. He is telling you, the reader, to take off your blinders and climb out of your hole and look, just look at all the wonders out there that exist in the world.

The rest of the story is just that: a little story that opens up nicely to reveal the only other part of Tolkien’s overall intent, which is to make the point that actions have consequences, and consequences reverberate outward.

We start in a hole in the ground, we open up as people and we see that if we are not careful, even in our isolation, our actions can have unintended consequences — consequences that future generations will have to bear. This is almost the opposite of what every insipid modern Tolkien-inspired fantasy tries to tell us, and something that bears more consideration.

Well, Peter Jackson chucks all that right out the window. He opens his telling of the story in the outer world, and spends the first ten minutes or so revealing the entire recent history of the dwarven race, providing us with backstory details that we are not supposed to have until, if you are following Tolkien, much later on in the narrative.

And it is gorgeous. Jaw-dropping. This is what Peter Jackson does better than anyone and if you don’t think to yourself “WOW — WOW-ee-WOWW” in the first ten minutes of the picture than something must be wrong with your sense of wonder. It is, it must be admitted, a glorious visualization of Middle-Earth history, and a smashingly dramatic opening to a movie trilogy. Really, it is. I mean — you have to give Jackson that. Entertaining? Absolutely, one hundred percent.

Is it Tolkien’s The Hobbit? Ehm, no… and not even close. There is a huge philosophical divide between this movie Hobbit and the book, and one doubts that Tolkien would be happy with it. My tattered old paperback copy of The Hobbit bears the tagline “A Prelude to The Lord of The Rings” — even though it wasn’t written as such, but as a stand-alone story. Jackson’s movie is clearly designed not to be a prelude to anything. Instead, it is a follow-up, and an expansion upon, the movie trilogy.

I suppose that there is nothing inherently wrong with that. But those of us who just wanted a clean adaptation of Tolkien’s novel that we could watch before a screening of the movie trilogy are still going to have to settle on the animated Rankin-Bass version.

— Frede.
www.ducksoup.me
www.tarotbyducksoup.com
Posted by Freder at 11:39 AM No comments:

My first email campaign is flying out even as I type this. Those of you not on my mailing list can ogle the thing here:


http://eepurl.com/biZuNX
Posted by Freder at 4:21 PM No comments: 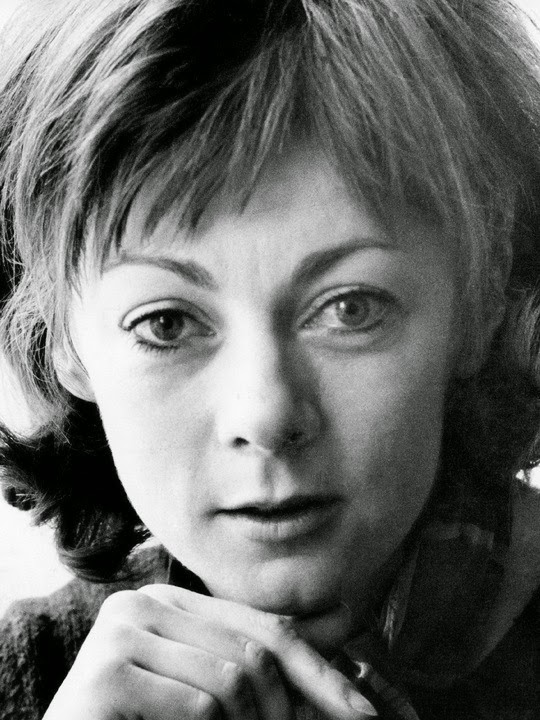 I'm very sad to learn, two months after the fact, of the Geraldine McEwan's death. I adored this woman. She was Miss Farnaby in Mulberry (a lovely short dramady series co-starring Karl Howman as the mysterious title character); she was deeply disturbing as Sister Bridget in The Magdeline Sisters, she was the captivating Lucia in two series of Mapp & Lucia, she was definitive Jean Brodie, she had a theatrical career spanning more than 40 years. She even voiced a character in Wallace & Gromit. It was the twinkle in her eyes and the suggestion of hidden depths that made her, by far, the most interesting Miss Marple. And so another great tree has fallen: and the world is diminished once again. Goodnight, Miss McEwan.

--Frede.
www.ducksoup.me
www.tarotbyducksoup.com
Posted by Freder at 12:34 PM No comments: