Two Checkmarks on the Side of the Angels 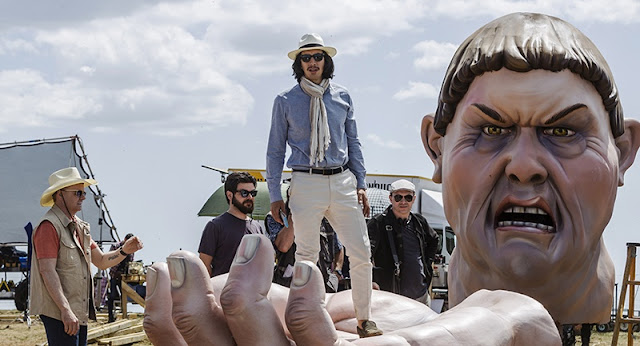 Terry Gilliam’s The Man Who Killed Don Quixote was assured legendary status when his first attempt at filming it became, quite by accident, the documentary feature Lost in La Mancha; an exercise in creative frustration that details the succession of disasters which forced Gilliam to shut down the production.

Fifteen years later, with several other good films in the can (notably the almost equally plagued Imaginarium of Doctor Parnassus and the excellent Zero Theorem, with Cristoph Waltz cast against type as a programmer of imaginary worlds), Gilliam finally — on his third attempt — managed to get Quixote made. Of course making a picture isn’t always the end to difficulties: although the film was in the can, finding an American distributor posed a whole other set of problems. The film never did get a fair distribution in the states, although it is available now on Blu-Ray and DVD.

And I want to pause there and say to the American film industry, in a full sense of Greta Thunberg thundering outrage, “How dare you?” Gilliam is one of the last great visionary directors of our time, but Hollywood continues to ignore him because the films he creates are not the off-the-shelf tripe that they prefer to stuff into American cinemas. As far as I know, the only exhibition that The Man Who Killed Don Quixote ever got in the whole state of Maine, USA, was in my house.

And sad to say, for different reasons, I was afraid to approach it myself.

I was afraid that it wouldn’t measure up after literally a decade and a half of anticipation.

And now I can say to myself, “Oh ye of little Faith.”

Thematically it is deeply connected to both Brazil and The Adventures of Baron Munchausen, but it's deeper and richer than either — the work of a mature filmmaker in every sense. It is a riot of life’s trials, an object lesson in what can happen when the things that people create are better than the people who create them, and a cautionary tale of playing with creative fire, or the fire of creativity.

I wonder if Gilliam is now glad that his first two attempts at making this picture failed; for the picture we have as a result is probably better for all of the trials that he suffered in its making. It’s almost certainly a better picture than the first version would have been: Jean Rochefort was a very sick man, not up to the demands of the title part (Jonathan Pryce says jokingly that the movie had to wait for him to get old enough to play Quixote, but it’s the kind of joke that causes the shade of Fate to smile and nod); in the same way, Jonny Depp had already fallen into self-caricature, and could not, I think, have delivered as powerful a performance as Adam Driver now does in the finished film.

Tears. Redemption. I feel Gilliam is the most profound filmmaker of his, my, generation. Your mileage may vary —  heck, I always seem to be out of alignment with the idiotic taste possessed by most of the rest of the world, which seems to be satisfied with live action remakes of Disney cartoons — but I loved this picture. It is original and big and great and possibly Gilliam's best movie.

Next to Quixote, 1978’s Days of Heaven (written and directed by Terrance Malick, is the best god-damned thing I've seen in many moons. It took me powerfully back to the days when the cinema was still magic and movies were worth going out to — the days when a film could transport you into another time, another life, another world. The days when movies were Faith to me. It is gorgeous and immersive and divine. There's just one thing holding it back: Richard Gere, yet another “star” that I utterly detest, and his so-called "acting" in this movie bears out why I feel that way. The man is just a pretty-boy: his hair is always blow-dried and his face never gets dirty and he never needs a shave (all things that defy credulity in a picture like this) -- and he has Just One expression, only one, that he uses no matter what is happening. Gere should never have had a career. He is a great big ZERO, and his presence here intensely damages the movie. Fortunately he is kept in the background much of the time; it feels very much as if Malick cast him to please the studio and the backers. Oh well — when Gere isn't stinking up the screen with his half-baked and half-assed performance, it's a wonderful picture.

Out of the Can Episode Three

Presenting a new episode of "Out of the Can," an irregular glimpse behind the scenes of what I vaingloriously call "Duck Soup Productions." Nonetheless, there's some stuff in here that I am -- unjustly or not -- somewhat proud of... See if you can spot QUIRK peeking over the top of the can... and then retreating back into it!

-- Thorn
www.tarotbyducksoup.com
www.ducksoup.me
Posted by Freder at 6:31 PM No comments:

In case you think I've been slacking lately, presenting not one but TWO new releases in my Tarot Shop, www.tarotbyducksoup.com . The first is the beautiful new Second Edition of the Original Arthur Rackham Oracle. This was printed offset in Hong Kong and is a deluxe deck in every sense of the word, with quality glossy card stock, gold edging and a sturdy, printed two-piece box for just $35.

The second is the ZIRKUS MÄGI CLASSIC BAVARIAN ORACLE -- which is a fancy way of saying that it's a classic "Kipper"-style deck, all done up in the colorful Zirkus style of my flagship Tarot deck. All new art, bridge size cards, packaged in a plain white tuck box.

I have two more releases in the pipeline for October, so stay tuned... and thanks for your support!

--Thorn.
www.tarotbyducksoup.com
www.ducksoup.me
Posted by Freder at 3:00 PM No comments: