The Movie that Changed Hollywood, Regurgitated.

From the time of its announcement, I had a hard time understanding why a new Disney-certified and rebooted Star Wars would be of interest to anyone. The original Star Wars was a confection made by one man, a kind of humble homage to the great Sci-Fi movie serials of the past: Flash Gordon, Buck Rogers, The Phantom Empire et al. The worst thing that George Lucas could ever have done was to start taking it seriously — and yet that is exactly what happened. You might say that Joseph Campbell killed Star Wars by convincing George Lucas that he was making “Mythology” with a capital letter — instead of the confection it really was.

Both as a series and as an idea, Star Wars had run its course by the time its mostly wretched second sequel, The Return of the Jedi, was released in 1983.

So why did, does, the prospect of a totally corporate-owned, cookie-cutter processed remake of Star Wars excite everyone so much?

… especially given the no-talent corporate hack they hired to make the thing. J.J. Abrams has proved time and again that he’s nothing but a cog churning out one piece of processed, corporate-owned crap after another, spraying polystyrene and pixels onto the bones of long-dead work created by his betters. He’s never created anything of his own that was worth a damn. Like Twin Peaks before it, Lost was nothing more or less than an elaborate practical joke perpetrated on its audience. When a creator shows that much contempt for the people who ultimately pay his salary, he deserves nothing but contempt in return.

And here’s the biggest insult of all: Star Wars fans were promised a sequel and a continuation of the series. By definition, this calls for original ideas to be present.

The fans were duped: Star Wars: The Force Awakens is in no way a sequel. It is a remake. A flat-out, straightforward remake in exactly the same sense that Disney remade its own 101 Dalmatians and Jean Cocteau’s Beauty and the Beast.

Ho-hum: here we have yet another Death Star, yet another Darth Vader, yet another Disaffected Youth from a desert planet (Abrams couldn’t even be bothered to change that detail) to the Rescue. It is exactly the same story as the original Star Wars — and that settles that.

In the manner of all modern remakes, there has been some fiddling with the most minor of details to satisfy the mores of a changed world: Luke Skywalker is now a girl, and to insure that the supporting cast isn’t as lily-white as it was in the original, the part of Han Solo has been split across a racially diverse duo.

Meanwhile, Mark Hamill has assumed the mantle of Sir Alec Guinness’s Obi-Wan Kenobi, even down to the beard (which doesn’t bode well for his continued participation in the series), while Carrie Fisher and Harrison Ford are on hand for exactly the same reasons that Kirk Alyn and Noel Neill turned up in Superman: The Movie — to make the fanboys coo and hug themselves. Their cameos may be larger and longer, but the purpose they serve is the same.

In the end, Star Wars: The Force Awakens proves only the things that never needed proof: that it really is all about the money, that the moviegoing public will always settle for more of the same, and that J.J. Abrams’ is a hack whose talent (if he has any at all) lies in getting large numbers of people to eat regurgitated, processed human remains (we really are living in the world of Soylent Green now).

And so, as Spike Jones once twisted it, the sun pulls away from the shore and our boat sinks slowly in the west. The Disney Conglomerate Machine rides off into the distance, ecstatic over their acquisition: they now own and have successfully re-booted the biggest cash cow in Hollywood history.

Meanwhile, my generation has to deal with the terrifying fact that Hollywood is still thriving on remakes — it’s just that the clock has kept on ticking and ticking and ticking, that it is later than we thought, and that they have moved on: no longer are they re-making stuff from our parent’s youth; they are remaking stuff from our youth. After all, it’s just about the same stretch of time between the original 1933 King Kong and Dino De Laurentiis’s 1976 remake, which was itself remade by Peter Jackson thirty years later. Carrie Fisher and Harrison Ford can’t be much younger (if they are younger) than Fay Wray was in the 70’s…

They times, they are deranging.

— Freder.
www.ducksoup.me
www.tarotbyducksoup
Posted by Freder at 2:01 PM No comments:

Salon Art Cards are 54-card packs featuring some of our most popular images on jumbo-sized (3.5" x 5.75") cards with manifold applications. Use them as Post Cards (they are regulation USPS-sized), Invitations, Note Cards -- or as the most impressive calling cards any of your contacts have ever seen. 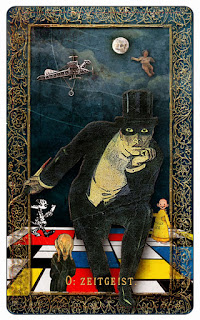 Choose from any one of our standard backs (currently 3: more are on the way) or get completely customized backs any way you want them for a nominal extra charge.

Approximately half the price of normal Post Cards when bought singly.

Tarot of the Zirkus Mägi and Tinker's Damn Tarot are ™ and © 2015 Duck Soup Productions.
Posted by Freder at 2:52 PM No comments: