It Seemed Like A Good Idea At The Time.... 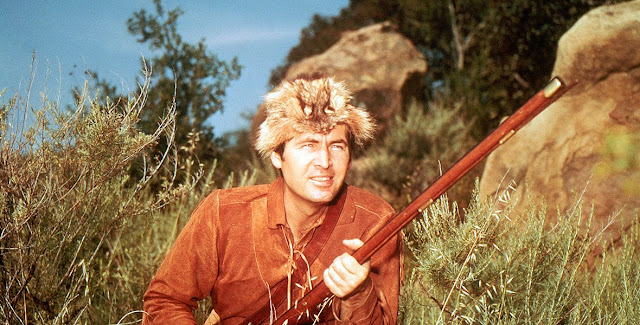 I recently finished watching the first season of Fess Parker's DANIEL BOONE TV series, which aired for six seasons starting in 1964. This was one of those things that I was aware of while it was originally airing, but for the most part was never able to watch... because I was a little kid, and my parents packed me off to bed at the ignominious hour of 7:30.

I'm quite enjoying the opportunity to catch up on all those series that I knew about, but didn't watch back in the day. It's not all great stuff, but I feel like I'm filling in the gaps of my cultural experience, if that isn't too pretentious a turn of phrase.

The Fess Parker BOONE is actually quite a well-made show and more entertaining than I ever imagined it would be; but if it proves anything, it proves (even through its sweetness and innocence) that we (namely White Folk of mostly British descent) absolutely did march in here and just take everything and anything we wanted.

The very first episode opens at Georgie Washington’s house, where Georgie is meeting with a Snooty English Guy. Enter Dan’l BOONE and his pal, the latter of whom is known in Hollywood as “the hot-headed one.” Dan’l’s pal takes one look at Snooty English Guy and goes all “GRR! GRRRR! It’s a Snooty English Guy! Why, I ought’a—“ Dan’l calms him down and taking the Better Part of Valor, ushers him out of the room.

Alone again with Georgie, the Snooty English Guy says, “What’s all this stuff about WAR against England that I’m hearing?”

Georgie assures him that it’s nothing, just some Youthful High Spirits, there isn’t gonna be any war.

“WELL THERE’D BETTER NOT BE!!!” snarls Snooty English Guy, who stomps out of the room.

No sooner is he gone than Dan’l re-appears; Georgie turns to him and says, “Now about this WAR we’re gonna have…”

Always the practical one, Dan’l knows they’re going to need a better Defense than what they’ve got. His solution? “How’s about I head right on that inta th’ heart of INDIAN territory and find us the perfect place t’ build a FORT?”

This is where my eyebrows met my hairline. I thought, “Dude, d’you hear what you just said? That land doesn’t belong to you! You can’t just waltz in there and build a fort in their back yard! That's ASKIN' fer trouble!”

But we could. And we did. And we’re STILL giving Native Americans a hard time because they didn’t just roll up they sidewalks and get out of our way.

-- Thorn
www.tarotbyducksoup.com
www.ducksoup.me
Posted by Freder at 7:08 PM No comments:

Holli Would if She Could... But She Can't. 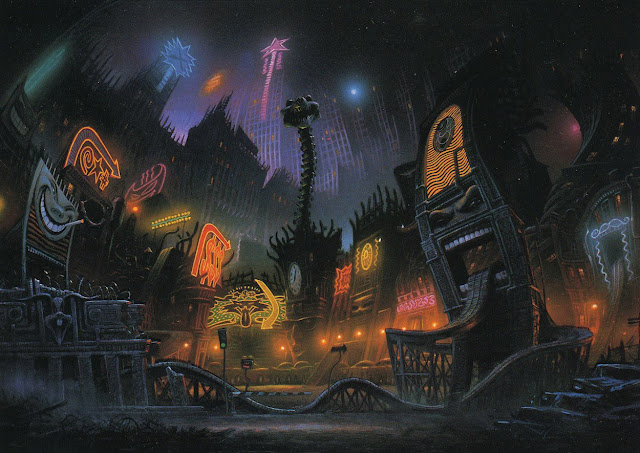 In trying to catch up with all of the movies that one was aware of when they were released, but never had a chance to see, one inevitably runs into a few Stink Bombs along the way; and it saddens us to include Ralph Bakshi's COOL WORLD, from 1992, in that category.

In Bakshi's defense, it's not the movie that he wanted to make: while he was shooting, the script was completely re-written without his participation or consent by the studio. With no script to work from, Bakshi reportedly told his animators to "do whatever they wanted" -- no good can come out of that kind of chaos, and none does.

You can't fault Bakshi for having a lack of ambition, that's for god-damn sure, and this is at least as ambitious as his version of THE LORD OF THE RINGS or his attempt to dramatize all of pop music history in AMERICAN POP. The latter picture was at least a success in its ability to start interesting conversations. COOL WORLD has another thing its favor, in that it's drop-dead gorgeous. In purely visual terms, it may be his best movie.

And yet, it's a complete train wreck. You can't under-state this, and you almost can't believe what you're seeing -- it's that bad, a disjointed bomb with a capital B: not for nothing does it have a 4% rating at Rotten Tomatoes. There are good ideas behind it, but the writing is so dreadful that it's doubtful anyone could have made anything out of it.

The live-action characters are flatter than the paper that the animated ones are drawn on, and while the animated characters are full of bombastic toonish shenanigans, none of them are charming or engaging. The cutting between the two worlds is ridiculously bad, and no one involved with this thing took the time to craft a believable, let alone involving, storyline. Kim Basinger never stops moving and acts as if this was her last, best chance at superstardom, as perhaps it was. The whole thing is one big, frenetic, pleasingly colorful disaster.

It's likely that Bakshi was inspired by WHO FRAMED ROGER RABBIT, and that he wanted to make something in the same vein that asked larger questions and told a more serious story about life and death and art and love. But the end result is nowhere near as accomplished or entertaining as ROGER RABBIT was, and not even close. Bakshi didn't have the money to make it technically as good, and studio interference insured that anything good in the original concept would get whitewashed right out of the thing.

Bakshi has been one of my heroes and he has a unique but problematic place in the modern cinema. COOL WORLD was his last significant movie. Its visual accomplishment only makes it that much more disappointing.

Meanwhile, 1975's THE HINDENBURG crawls across the movie screen at a stately pace that's appropriate to its namesake. Directed by Robert Wise in a strictly workmanlike fashion, it features George C. Scott and Anne Bancroft heading a mostly wasted cast. What's Burgess Meredith doing in this thing? Sitting around, like the rest of us, waiting for the ship to blow up. Several contemporary reviews, excerpted at Wikipedia, are more entertaining than the picture. It's not that bad, really... it's just that it's a very ordinary early entry in the disaster genre. The special effects are wonderful, and prove that models and optical effects, when done well, are better than CGI any day of the week. Some magnificent shots of the ship in flight and taking off at night are worth sitting through the rest. And even when she's given trivial material to work with, Anne Bancroft is a revelation.

--Thorn.
www.tarotbyducksoup.com
www.ducksoup.me
Posted by Freder at 10:28 AM No comments:

And So The Queen


Near the end of E.F. Benson's Queen Lucia, first in his series of novels following the social progress of Benson's monstrous but lovable anti-heroine Lucia Lucas, Lucia's primary accomplice Georgie Pilson (euphemistically described as a "confirmed bachelor") suddenly breaks down and reveals his true feelings for Lucia's main rival of the moment, opera star Olga Bracely.

It's just a moment. It's just a (very short) sentence. And yet it is the absolute moment in which Queen Lucia is elevated from being a delightful, gently twisted light comedy to the status of a genuine classic. Like all the people at home in Lucia's main stomping grounds, the little English village of Riseholme, Georgie may be a predominately comic character, but in that moment he becomes real: and that's an achievement that many more high-brow and more highly-thought-of novels often fail to arrive at.
The book made me happy on many levels; and the good news is, there is more to come: and I believe they get better from here.
The LUCIA stories differ greatly from the Larkin family novels of H.E. Bates, from the Fairacre and Thrush Green books of Miss Read, and from the much zanier stories of Wodehouse, and yet they are all joined at the hip, for their good humour, their humanity, for the fully-realized worlds that they create, and for capturing specific and different aspects of the British personality. Like all the best fantasies, they take root in the reader's hearts, in a place where one joyfully returns to them again and again.

-- Thorn.
www.tarotbyducksoup.com
www.ducksoup.me
Posted by Freder at 2:42 PM No comments:

After successfully funding at Kickstarter last month, the Revised and Refined Second Edition of THE ARTHUR RACKHAM ORACLE is in production and coming soon! Here's the trailer for the new edition -- I had fun making it, and I hope you'll have fun watching it.

Withe best wishes to all of you;

-- Thorn.
www.tarotbyduscksoup.com
www.ducksoup.me
Posted by Freder at 5:30 PM No comments: