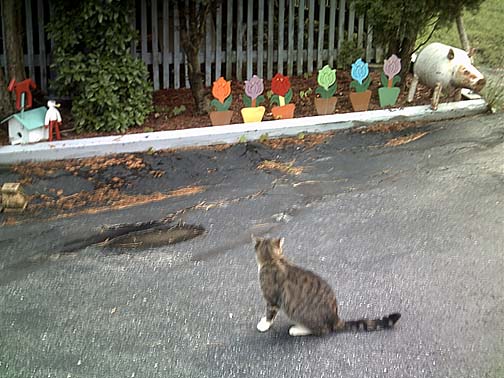 I knew that there would be tears today and I wasn't wrong about that (note to self: don't play "Into the West" by Annie Lennox again). Weren't the first, won't be the last. But today I'm going to do That Holiday Thing and count my blessings.

First and foremost, I am thankful that I don't have in front of me what I had in front of me last year at this time. We are well and truly ensconced in our new home, and if I still haven't figured out what to do with the rest of my life, at least I have solid footing from which to plan the launch.

I'm thankful to the people who helped make this happen, especially my father and his wife, my lawyer Joann and her assistant Sue. Without Joann and Sue, and their compassion (never pressure), I don't know what I would have done in the past year and a half.

I'm thankful that my sister wasn't the executor of the estate!

I'm thankful that I still have Patches, Whitey, Pandy Bear, Honey, and, outdoors, Tiger Whitestockings. They mean more to me now than ever before. I don't know that I'd be alive without them in the picture. This year has wrought big changes in their lives and their behaviours, too. Patches is no longer afraid to come upstairs to my bedroom and sleep with me. Honey is willing to share. Pandy Bear isn't "marking" the house. Much.

I'm thankful to have Honey sitting on my lap as I write this, even if it makes it much harder to type,

I'm thankful to my employers and co-workers for keeping me on during what was really not a very productive year. I'm thankful to be coming out of the fully shell-shocked stage at long last, and to be passing into the stage of true mourning. It's progress.

I'm actually thankful to be out of the old house, with all its problems and associations. There, it was raining indoors in more ways than one. There, winters were so isolated that we felt as if we were living on the moon. If I feel as if I have lost much in the way of history, I have lost much more in the way of troubles, concerns, difficulties and sadness.

I'm thankful to be paying down half of my home mortgage next week, and thankful too that there will be enough left over from the estate to provide some liquidity in case of emergencies. After all, life is one big emergency waiting to happen. Lots of people don't have anything to fall back on, and I am one fortunate guy in that regard.

I'm thankful for Laurel and Hardy, Buster Keaton, Doctor Who, Ramsey's Kitchen Nightmares, for Pee Wee Herman and Turner Classic Movies and all the rest of the high and low filmic and theatrical distractions that have not just entertained me, but helped pull me out of my despair and even sometimes edified me or filled me with joy. The arts have always been That Which Makes Life Worth Living for me. They have been working overtime this year!

I'm thankful to everyone who has followed, perused and commented here at this blog. This has been the best therapy ever. Without it, and you, I would have had nowhere and no one to turn to. For lots of reasons, I can't actually talk about many of these things. Without this, they would go unexpressed and fester and get moldier and more corrupted by the day. So thank you all for putting up with this.

Most of all, above all else, I'm thankful to have memories of happier Thanksgivings. I'm thankful to my mother and my grandparents on both sides, all wonderful people whom I miss dreadfully on this day, for Having Been.

See, there come the tears again.