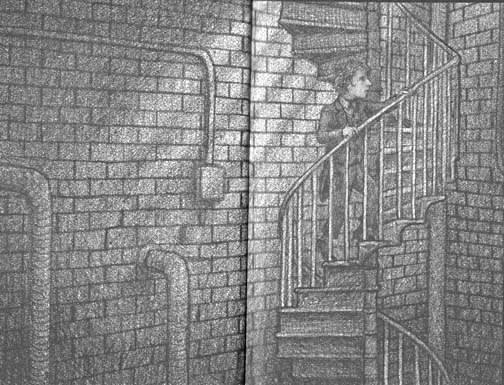 I was hoping by now to be able to write about Hugo, Martin Scorcese's new film from Brian Selznick's wonderful book, The Invention of Hugo Cabret. This is a bit of a milestone for me: I've never seen a Scorcese picture before. It's for the same reason that I'll never watch The Godfather films or Apocalypse Now: Scorcese's work is much too dark, violent and intense for me. When Gangs of New York came out, I watched the trailer and thought that it had a really wonderful look. Then I saw the actors carrying around meat cleavers and knew that they weren't going to be used on a roast leg of lamb. No, thank you, Mr. Scorcese. I know that his films are of a high standard and are not exploitative -- but I also know my limits.

Now, for the first time in his life, he's made a film that I not only can sit through but am eagerly looking forward to -- and the stupid local cineplex, which usually is all over any 3-D release, isn't putting it on the schedule. It's not even coming in next week.

Mind you, they have Happy Feet II running on two screens in both 3-D and flat versions. Wasn't one Happy Feet movie bad enough? They have the latest Adam Sandler stink bomb (who goes to his movies, anyway?). They have Arthur Christmas, whatever that is. They have Disney's The Muppets.

I believe they will be serving Ben & Jerry's in hell before I'll sit through any of that rubbish. And if these choices, versus bringing in Hugo, accurately reflect what the average person wants to attend, then Joe and Jane Average have a lot to answer for.

I know that Disney's The Muppets is getting good press, but, former muppet fan that I am, I chalk that up to logrolling and ignorance. There's a reason why it's called Disney's The Muppets and not Jim Henson's The Muppets. No one from the Jim Henson Company was involved in the making of this picture! Even Frank Oz has called it quits. Given the tripe that Brian Henson has turned out in his father's name since the man's death, perhaps this is a good thing (The Muppet Wizard of Oz, anyone?). But two wrongs don't make a right,  and this is a "muppet" movie made out of one hundred percent artificial ingredients.

According to the Disney Company, nothing ever has to die, because nothing was ever really alive to start with.

But the Muppets were alive. They died with their creator, and should be allowed to rest in peace.

Back to Hugo. All I can tell you is that the book it's based upon is a unique combination of words and pictures -- not so much a graphic novel as a novel with purely cinematic sequences embedded in the tale. This approach probably screamed "make me into a movie" to a certain class of people. But to me the entire point lay in that it was printed on paper and bound between two covers. Here is someone who managed to get a genuinely cinematic experience into a book. That the early days of cinema factored into the story only made it that much more appropriate. The Invention of Hugo Cabret is so much a vision of its author that I balked a bit when I learned that it was being filmed.

Time will tell if I ever get a chance to see Hugo in a movie theater, where I imagine it truly needs to be seen. All I can say for now is, I'm awfully glad that Steven Spielberg didn't his damn dirty hands on it. (I'm tempted to ask Mr. Spielberg, in the unlikely event that our paths ever cross, what it feels like to Rape Tintin.)