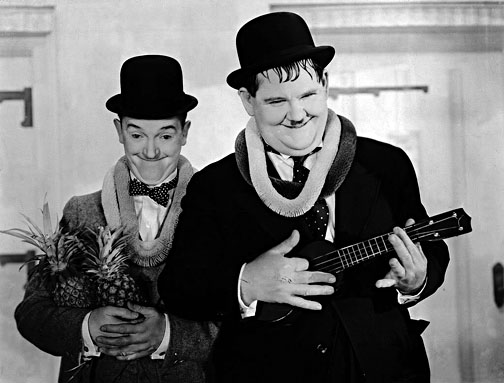 I really didn't need or want to spend any more self-indulgent money this month. But in every person's life there are some luxury items that aren't luxury items -- they're necessities, and this one dropped into my lap in Monday's mail.

The treatment of Laurel and Hardy on DVD has been shameful. Although Hal Roach Studios issued their complete silent shorts early on in the format's history, those editions went out of print right away: blink and you missed them. Since then, Laurel and Hardy's availability on DVD has been limited to cheap releases of their public-doman titles, The Flying Dueces and Atoll K, the sad later features that they made for Fox, and TCM's release of their limited holdings, Fra Diavolo and Bonnie Scotland (the set also includes the Laurel and Hardy segments from Hollywood Review of 1929, Hollywood Party and Pick a Star; though it would have been nicer for TCM to include the complete features).

This means that the main body of their work, the films on which their reputation was built, have been unavailable to the general public for something like a decade and a half. Even before that time, VHS releases of their work were sporadic at best.

So I just about jumped out of my chair when, while browsing an online retailer who shall remain nameless, I came across this little item: 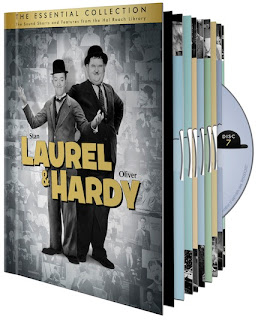 Laurel and Hardy, The Essential Collection is a TEN disk set that gathers ALL of their talkie short features, ALL of their feature-length comedies (at least, the ones that are not available on the TCM and Fox releases) and -- get this, all of the expanded foreign-language versions of that they filmed of select shorts.

It's ALL HERE. Well, not all. Babes in Toyland (AKA March of the Wooden Soldiers) is, like the movies included on the TCM package, available from another company). But, by and large, this really is what the title says it is: the release I've been waiting for all of my life!

I didn't waste any time lecturing myself about being careful with money. This HAD to join my library.

My first exposure to the team came in the days when local TV stations filled their afternoon schedules with movie packages. Some stations bought packages of the Laurel and Hardy shorts and stripped them as a half-hour weekday show. I was pretty young when that was going on, but I remember being mesmerized by a short that I now know as Below Zero. Later, when I was eight or ten and beginning to discover that my father and I had little in common, it turned out that our taste in comedians was pretty much identical. Dad sprang for a couple of used 16mm prints of Laurel and Hardy's Any Old Port and Scram! and I watched them over and over.

In the early days of VHS I managed to acquire (mostly through piracy) copies of about a third of The Nostalgia Merchant's releases of the Laurel and Hardy short sound short subjects. The prints used by TNM were often pretty well worn and sad, and pirating them knocked them down another level in quality, but it was all that was available. I was delighted to have them. Last year I transferred them to DVD, and they cheered me up again at a time of terrible sadness.

Here's the thing: I think that, unlike the Marx Brothers or The Three Stooges, Laurel and Hardy are pretty much true-to-life. They always mean well, they always try their best and hardest, and it always ends by blowing up in their faces, usually literally. If, like me, you see life as a continuing series of pain, battles, pain, disasters, pain -- then you've got to love Laurel and Hardy. They show you what life is really about, and make you laugh at it. Though often dark, not to say sadistic, not to say catastrophic, there is not an ounce of mean-spiritedness in their films or in their personalities. If Laurel and Hardy can survive the situations they're presented with, and come out of it cheerful, side by side, as friends -- this makes you believe that you can survive your trials the same way.

Why do they stick together when their combined qualities are so clearly incendiary? Because in the explosive world that they inhabit, their friendship is all they have. Though they spar and fight, they are true Pals presenting a united front against a world that means to kill them.

Since my copy of the set arrived on Monday, I've been doling it out in small doses, wanting to make it last. I've laughed out loud more than I had in the last two years combined. So far I've watched Unaccustomed As We Are (their first full talkie), Berth Marks and Men O' War -- none of which I'd ever seen before. Those of you who know me can appreciate what it means to me to see completely New-To-Me Laurel and Hardy at this stage of my life. It's a gift from the Heavens. It's proof that some things survive. It's also proof that I haven't forgotten how to laugh.

These prints are not the battered, beat-up old Nostalgia Merchant prints, either. They come direct from the Hal Roach library, and are the original 35mm masters. The box claims that they have been remastered in High Definition for the first time, and digitally restored, and I do not doubt this; but some of these pictures are ninety years old, and (I found especially on Unaccustomed as We Are) there are still scratches and other visible signs of their age. That said, this is the best that Laurel and Hardy have looked, certainly within my lifetime. Men O' War is in remarkable, almost pristine condition.

Among the extra features on disk ten is an "appreciation" of the team: literally, it's Jerry Lewis, Dick van Dyke, Chuck McCann, Tim Conway and Penn & Teller just talking about why they loved Laurel and Hardy. I found this completely moving. The word "love" is not misplaced. Lewis, Van Dyke and McCann actually knew Stan Laurel in his later years; Lewis vetted some of his scripts with Laurel, and was told by Laurel that they had so much experience in common that they could have been brothers. These men petitioned the Motion Picture Academy to grant Laurel a lifetime achievement award, which he refused to accept in person because he felt that he has disintegrated so much physically and he wanted the public to remember the character he played as he was.

They talk about how hard Ollie's death was for Stan, and they mention that Stan was still writing sketches for the team up to the time of his death.

It's just a very heart-felt piece, and hard to get through without tears.

You can bet that I'll be writing about this set for months to come. Cracking into it has been just like opening a treasure chest. If you're at all serious about comedy, if you love Laurel and Hardy or even if you have never met them, I cannot recommend it highly enough.