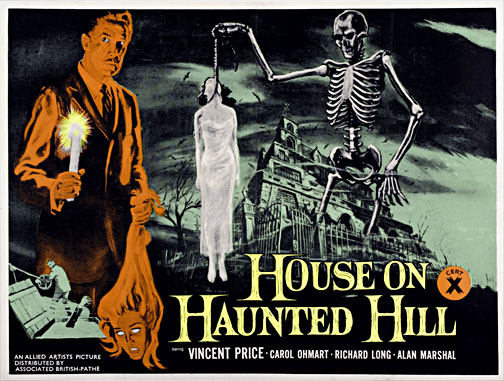 Among the Halloween offerings on TCM this season was a hefty helping of Vincent Price. One of the pictures they showed presents a knotty problem.

Even when you go to the trouble of checking the dates, it's a dead heat, but we have an incestuous trio on our hands. Both Shirley Jackson's The Haunting of Hill House and William Castle's el-cheapo The House on Haunted Hill first appeared in 1959, and they are, uncannily, the exact same story, with uncannily similar titles.  But Jackson's novel relies on subtlety and psychology for its effects, and is only obliquely "scary." Castle certainly seems to have read the book and thought to himself. "I can do that story, only I'll make it really REALLY scary! I won't fool around with shadows! I'll make it in your face!"

Except that his version turns out to be even less scary than Jackson's. With Price simpering about in his hammiest fashion, and Elisa Cook trying to convince us how scared we should be, and blind maids adopting fright poses for no reason at all, The House on Haunted Hill is really quite funny, in the "derisive snort" sort of way. Who keeps an acid pit in their basement, anyhow? The Big Reveal at the end, with puppeteer Vincent  reeling up one of the most bizarre (and unworkable) contraptions ever, is certainly one of the silliest in Horror History!

Of course The Haunting of Hill House was filmed for real in 1963, and it's one of Robert Wise's best. Somehow by being 100 percent faithful to the novel, he transcends it; and the old adage that it's what we don't see that's really frightening is proved in a big way. A great performance from Julie Christie didn't hurt.

Perhaps to avoid confusion with the Castle Camp Fest, the title was changed to simply The Haunting.

After a short pause, in 1971 Richard Matheson, who gave us The Last Man on Earth and The Incredible Shrinking Man among other things, seems to have had the exact same brainstorm that William Castle had twelve years earlier. With his novel, Hell House, once again we have the same basic story, and even the same basic characters. But this being 1971, Matheson takes Jackson's undercurrents of sex and hauls them out into the open, ramping up the violence and shocks in the process. It succeeds where Castle's version doesn't, for being genuinely frightening, but again its effects are purely visceral.

When it was filmed as The Legend of Hell House (the title change almost bringing us full circle), it had to be toned down considerably -- and even so, the movie packs a small wallop and is one of the better examples of the "make 'em jump and scream" school of horror films.

We lived in much less litigious times in those days. Of course Shirley Jackson was dead by the time Hell House came out, but her estate still could have taken action.

With all of this Haunting of Hellish Hill Houses on Hills, you'd think that people would learn a lesson: when a strange character invites you to spend a night locked in a Haunted House, don't do it! Even if the place isn't haunted, chances are that Vincent Price is out to get you.