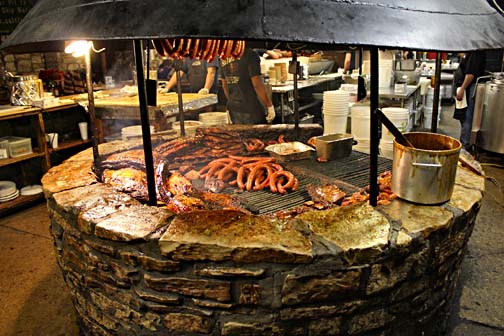 Last night, somewhat out of desperation, I took a hint from an episode of Anthony Bourdain's No Reservations and threw a pork chop onto a big ol' bun. It's one of those things that, once you've seen it done, you can't understand why you never thought of it before.

You need a big bun to soak in the juices and handle the volume. And -- I don't know the proper terminology here -- you can't have the typical kind of pork chop with the bone going down the middle. You've got to have the cut that has the bone going around the edge. Cook up your pork chop any way you like, put in in the bun, and pig out. It's a meal all by itself.

I grilled mine on my Farberware indoor grill. Good luck finding this absolutely essential kitchen item anywhere today, the company hasn't manufactured it in years. George Foreman doesn't have anything that comes close!

Anthony Bourdain and Gordon Ramsay don't need me to do their PR for them, but I know that my mother would have enjoyed their shows, and I regret not getting cable or satellite television while she was alive. Mom deprived herself of very little in the way of "things that she enjoyed," but especially in her later years some televisual seasoning would have been welcome. We were strictly a free-over-the-air antenna TV household, and for some reason we had it in our heads that it was an either / or proposition, that getting cable would cause us to lose the local stations that she depended on.

In fact, my television has about a hundred and eighty-seven connection ports. I currently have three devices hooked up to it and switch back and forth with ease. If I wanted to add an over-the-air antenna, the hardest part would be climbing up onto the roof. (No, maybe the hardest part would be getting down. Something tells me I'd be clinging to the chimney for dear life, sweating and screaming for someone to call the fire department.)

It's not that DirectTV or cable are any better than broadcast TV. Out of a bazillion channels, a veritable tsunami of available programing, sensory overload waiting to happen in nearly any genre you can imagine, the vast majority of it is unwatchable crap. Can you say Ghost Adventures? They build you up for twenty minutes and then spend the rest of the show stumbling around in the dark going "Did you hear that?" "Did you see that?" Uhm, no. There are some nights nights when I can't find a thing to watch. Even TCM lets me down on a regular basis (last night they ran Doctor Zhivago; even if I didn't own the movie on DVD, at something like nine and a half hours long, that's not a movie, it's a commitment.)

But I hate to run across things anywhere that I know Mom would have liked. It always makes me feel sad and guilty, as if I could have done more while she was alive.

Bourdain's No Reservations is a show that I can definitely see her sitting through a marathon for -- who wouldn't enjoy galavanting around the globe with such an experienced guide, even if he does have an attitude problem? Adam Richman's Man Vs. Food is another. It's nice to learn that there are still some regional styles of cooking that survive in the world of Tasti-Freeze and Wimpy Burgers that Peter Cook's Bedazzled Devil has so successfully created for us. I'm not crazy about the challenges, which fall into the category of grotesque, but up to that point Richman's show is pure Food Porn. And of course there's the Gordon Ramsay campaign for Total Global Domination And The Advancement and Promotion of Gordon Ramsay, of which only The F Word leaves me cold. It doesn't know what it wants to be; it has no shape. It's Ramsay's Bridge Too Far.

I dunno where I'm going with this. It all started with a pork chop on a bun. Mom would have liked that, too.