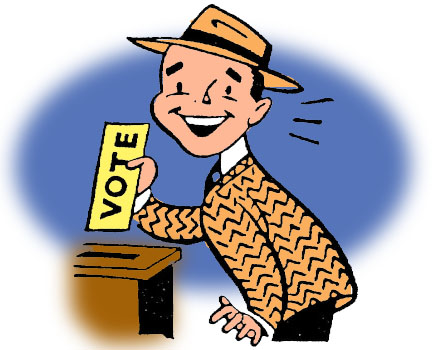 Voting was one of the emotionally difficult things to do last year. My mother had been dead for just six months, and voting was something that we always did together, even in later years when she needed to vote by absentee ballot. This year, voting was a whole new experience.

I've never had to run the gauntlet of candidates and petitioners before. Politics in the town of Albion was simpler. They still count the ballots by hand.

Here in town, there was quite a large turn-out for this off-year election even at a quarter to ten in the morning. They had already run out of "I Voted" stickers. As I came up from the lower end of the parking lot (walking at a fast clip because I was on my way to work) it became clear that the mayoral candidates had staked out the entrance and were doing the meet and greet thing as voters went in.

The current mayor, who has held the job for just six months, is someone I know from way back in my newspaper days. In fact I designed the flyer for his very first campaign, begrudgingly, on company time when I really needed to be pushing out ads. He was an ad sales rep for the paper, taking advantage of the creative services department to do his personal campaign flyers, and I was his assigned designer. I think he got in trouble for that one. My boss saw me working on it, and I wasn't going to cover Dana's ass for him.

He recognized me and grabbed my hand. I was able to smile and say, "Hey, Dana! How are you!" while thinking to myself, "Sorry, but you're not getting my vote."

The Independent candidate was lying in wait just indoors. Apparently they don't let you in without shaking hands first. I wished that I had hand sanitizer with me.

Albion's "voting hall" was a small classroom in the Town Office building. They used to have one lady checking off names and one handing out ballots. Here in town, the voting is done in a gymnasium and the names are divided into four stations, each station with two volunteers. There were more volunteers standing at the booths, directing traffic. When you're done voting, you walk out the other end and slide your ballots into two counting machines. I expect this is the usual that most people experience, but all my life, before now, I voted on folded paper ballots that were stuffed into a battered old box and counted at the end of day.

On the way out, I signed three petitions: one for equal marriage rights, one to allow independent voters to participate in the primaries, and one for I don't remember what. All I can tell you is I agreed with it at the time.

I'm not one of those people who has a hard time telling others how I voted. I wish more were like me, because I like to know how my friends and acquaintances voted and why. So here's how I went:

I voted Karen Heck (Ind.) for Mayor. For the lesser offices I voted straight Democrat, which wasn't hard to do as there were very few Republicans on the ballot and many people were running unopposed. I voted to repeal our governor's stupid law that would not allow voters to register on Election Day. This is nothing more or less than a Republican attempt to control the election. I voted against the casinos. I'm not anti-casino and have voted for them in the past, but only when the local Native American tribes were behind them. Maine disagrees with me, however, and thinks that casinos are only acceptable when gangsters, not Indians, are the beneficiaries. Last on the ballot was a bizarre item about rewriting the state constitution to switch re-districting from one set of years to another set of years. I don't know what was up with that. I voted against it. If the politicos can't come to a redistricting agreement in the amount of time they have allotted for it, then to hell with it.