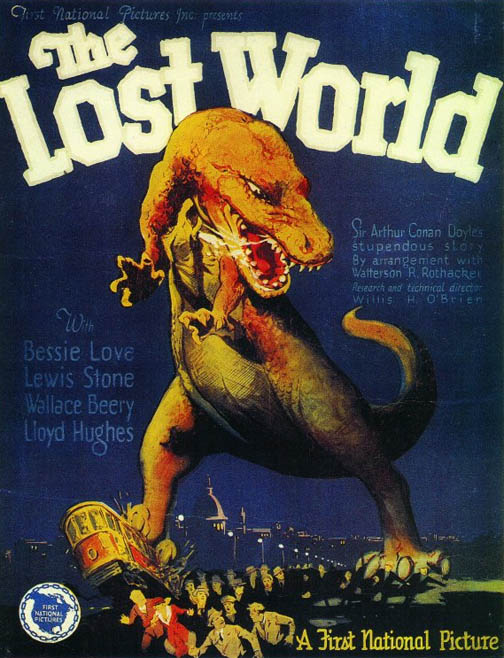 . . . sounds like I am groping for a metaphor to title one of my personal posts, but no, no, I'm really going to write about The Lost World.

The 1925 silent film made from the book was a long-time Quest for me. Being a fan of Ray Harrihausen and Willis O'Brien and their stop-motion dinosaurs was a big part of that. And really, what's not to like about stop-motion dinosaurs? Even The Valley of Gwangi, far from being Harryhausen's best film (although it contains some of his best work) is good fun to sit through.

Without exception, I find stop-motion dinosaurs to be far more effective than their modern CGI brethren. They have more personality, and despite the occasional herky-jerky quality of some of O'Brien's earliest work, or perhaps because of it, I find them much more convincing. Not even Jurass-has-had-it Park (as Mad magazine called it at the time) can hold a candle to Gwangi.

So, when I finally got my hands on a copy of the '25 Lost World about a decade ago, was I disappointed? Not a bit of it! The stop motion-dinosaurs are a bit primitive, but they have a genuinely eerie quality about them, especially at the end of the picture when what we used to refer to as a brontosaurus sets about demolishing London.

Oh, yeah -- Hollywood was Hollywoodizing even in 1925. In Sir Arthur Conan Doyle's original story, the Challenger expedition brings back a baby pterodactyl with them, only to lose it through a window. But this being The Movies, they had to bring a full-size brontosaurus! Never mind how -- it doesn't have to make sense!

The senior Wallace Beery chews up the screen as Professor Challenger, and the story moves along at a clip, remaining (except for the brontosaurus) as faithful to the book as anyone could expect. And -- oh my! -- in the Ain't Technology Wundafil department, you can watch the full movie online here:

The reason I'm typing all this is that I had the chance the other evening to watch the 2001 remake with Bob Hoskins as Professor Challenger, and to my great surprise I actually rather liked it. It's not that the CGI dinosaurs were very good -- they weren't. And the background music -- ye gods! I don't think I've ever heard a more overwrought, overblown score.

But the cast was terrific and the adaptation was quite faithful to the spirit if not the letter of the book. Hoskins makes a smashing Professor Challenger and it's nice to see him playing something out of his usual neck of the woods. There are hordes of familiar faces in the supporting cast -- including the late Peter Falk, that was a surprise! The direction is steady, the story gets told, and we finally get to see the real ending of the book. We're not talking The African Queen here, by a long pinch, but for a low-budget, made-for-TV venture this is above average. The New Zealand locations are stunning as ever, too.

I note that a TV series of The Lost World that lasted about three seasons was made right around the same time. This raises the question of why film and TV producers are so incestuous. Remember the two back-to-back remakes of The Poseidon Adventure that appeared one after the other, on TV and in the cineplex? Remakes are bad enough in principle, but how does something like this even happen? Presumably, there are rights issues. . .

At any rate, the stills from that series look dreadful, so I think I'll be drawing my line in The Lost World's sand right about here.

One last thing, and then we're done here. I never read the book until a few years ago when I was working in the production department of Thorndike Press, the biggest large-print publishing company in the world. Best job ever, bar none, and I don't expect I'll ever have it so good again. Where else could I have gotten paid to read (and typeset a new edition of) The Lost World? I'm quite proud of the work I did on that book, giving the design a subtle vintage look. I still have my copy.

So, for a collection of small reasons, The Lost World and I have a vaguely personal connection. Also, you have to be impressed that the same man who created Sherlock Holmes also single-handedly created a genre that's still being ripped off to this day. Conan Doyle was no stylist, but he certainly knew how to fabricate a High Concept.