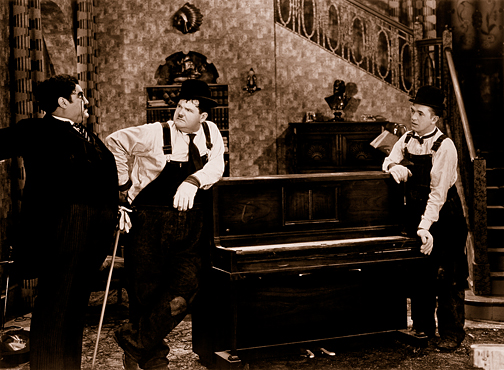 There's a reason why The Music Box is one of Laurel & Hardy's best-remembered films: it's at the very top of their Hoover, I mean oeuvre, thirty minutes of sustained, perfectly timed comedy. . . not just one of the great short comedy films of all time, but a great film, period.

More than that, I see in it a great metaphor for the Life We Live. It's not just about two guys delivering a piano. That impossibly long staircase, their burden, and all the frustrations and setbacks that they encounter -- that is True to Life, folks, and by giving us such a clear vision of Life's Difficulties, and then making us laugh at it, and laugh uproariously (well, I still have a bit of a cough, so I could only laugh until I started hacking my lungs up), the boys are doing something really special and astonishing.

There's a reason why the steps are a popular tourist stop to this day. I think people "get" it in a big way. Inanimate objects were always Laurel & Hardy's enemies, and this stairway is almost a character by itself, a malevolent entity determined to do them in -- just as they are determined to conquer it, no matter what it takes.

I won't belabor the point, and I really don't have anything else to say about the picture that hasn't been said before, by better writers. Just know that if you see only one Laurel and Hardy picture in your lifetime (and I honestly can't imagine a bleaker life if that's the case), make it The Music Box. Oh, and if you don't like this? Then you can't be my friend.

I'll leave it with a bit of trivia: Did you know that Billy Gilbert, the formidable gent in the photo above, frequent opponent of Stan and Babe, was also the voice of Sneezy The Dwarf in Snow White? It was his then-famous radio "sneeze routine" that got him the job.

P.S.: Thanksgiving was accomplished in Good Spirits. It was the right choice for me to face it alone.