W.o.W: Wasting your Time, and Making you Like It 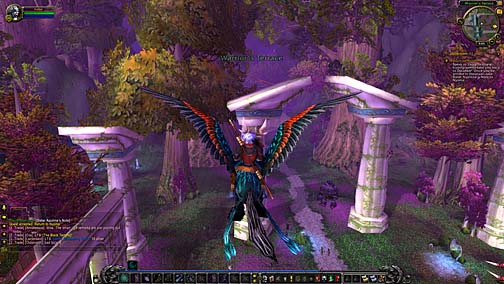 What is it about the Harry Potter books that makes them so compulsively readable? With apologies to J.K. Rowling, they aren't particularly well-written, the characters and themes are in no way original.

The same exact thing can be said for Blizzard Entertainment's online role-playng game, World of Warcraft. In the past week-plus, when I would drag myself home from work with barely enough energy to check email and Facebook and then sit here wondering what to do with myself, I confess that Blizzard's recent offer to play World of Warcraft for free (up to level 20) did reel me in.

And now that I've been playing for a while (my main character, a night elf druid, is up to level 10 and can take on the shape of a tiger!) I have to say that Blizzard's offer is pretty much the same thing as if they stood at the edge of a playground and handed out free doses of crack cocaine to the children!

If you even remotely like this sort of thing, World of Warcraft is unbelievably addictive. And I think the reason is the same as for the Harry Potter books: the setting is deep, detailed and immersive.

The world is huge: I've played for hours and explored just a tiny corner of it. The world is gorgeous: Blizzard has always employed the best artists and designers in the business, and the amount of work that has gone into this is impressive. The world is one of great variety: you can create up to ten characters, each one of a different race and class, who exists in a different corner of the world and experiences the game in quite different ways. As much as I've played over the last week and a half, I'm in no danger of wearing out my free trial.

I could do without all the killing, but the world hardly gives you a choice. There is an adrenaline rush when a hideous monster attacks you for no reason at all, and you manage to put it down (or not; I've been killed myself more times than I care to admit. Fortunately, resurrection and redemption are possible here, very much unlike real life). And there's a rush that goes even deeper when you've leveled up a bit, and can go back to those same monsters that kicked sand in your face, and give them a damn good thrashing.

There is also a plot. The game writers cleverly guide you through a series of chapters, during which thin layers of the larger tale come gradually into focus. As you rise and advance in the game, the plot begins to thicken.

Like all habits, it comes with a dark side. The download is humongous, ten gigabytes -- even with a high-speed connection, it took all night. And just as the game will take up a big chunk of your hard drive, it will attempt to take up a big part of your life.

I think Blizzard knew what they were doing when they made this offer: give the punters a sample, then reel them in as junkies!

For my part, now that I am feeling much better, it's time for me to reclaim my life, tear myself away from World of Warcraft, or at least deeply restrict the amount of time I spend there.

Great, just ducky. Like I needed another addiction to cope with.