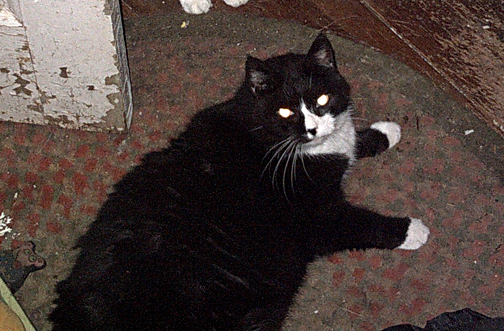 In the old days, he might have disappeared for weeks and lost half his body weight. He had a peculiar split personality in that, when he was in the house, he was so people oriented and had to be sitting on your feet at all times; but when he got outside it was all "Free at last! Free at last! Thank God Almighty -- I am free at last!"

Nowadays -- a night outside pretty much kills any interest in freedom he might have.

As I came down the next morning I could see through the window (and if you've been looking at the pictures of the Wonderland this house used to be, you'll know that's a monumental statement all by itself!) that Pandy was lounging on the front step.

Of course when I opened the door he immediately started to run off. But I've learned a thing or two in my old age and did not try to chase him.

Instead, I went out and sat on the ground and just called his name.

Eventually, with a lot  of coaxing, he took a step in my direction. Then another, and another. And then I had him.

He's become very vocal since the house was cleaned out. He never used to make a sound. Now he wanders through the empty rooms, yowling at the top of his lungs.

It's not their interesting, cozy home filled with hiding places any more. Even though I've made strides with the cleaning and arranging of what furniture I have, the place is still more like a mausoleum.
Posted by Freder at 9:33 AM