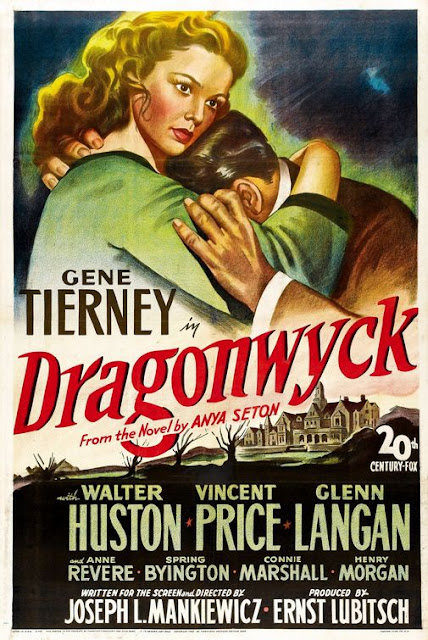 Last night watched Dragonwyck, expecting to be asleep before the end of act one. I'd seen the first half hour once before, long ago, expecting it to get scary or at least interesting at any moment -- but it never did. The only reason I have it now is because it came as part of a cheap box set with Chandu the Magician. The latter is by far the more entertaining movie, yet Dragonwyck was the one that kept me awake.

Calling this a horror film is a gross marketing misstatement: it is a plain unvarnished gothic, and a mild one at that. But although the budget seems minimal, it is beautifully photographed and composed, with pale white faces shot against deep shadow, and sometimes the reverse. The writing is almost too subtle for its own good: some of the story material is touchy for the time period, and viewers are often left guessing until some cunningly placed line causes the lightbulb to go on.

Vicent Price is hardly known for under-playing any role, but here he gives a masterfully controlled and precise performance, whereas it's Gene Tierney who sometimes over-works the material. Walter Huston is quite good, but the actor who really runs with what she is given is Spring Byington as the faithful household retainer who is always ready with a comment that carries about six different layers of meaning. She knows how to use her eyes and voice in just the right way to imply much more than what she is actually saying.

A young Harry Morgan -- Col. Potter from M*A*S*H -- is in the picture, too, miscredited as "Henry Morgan," having a ball as an uppity tenant farmer who's mad as hell and not going to take it anymore.

Selfishness, murder, rising and falling in station, and disillusionment are the themes, played out in a cavernous manse that's run like a small  independent nation, much to the consternation of the little people. It did not hold my constant rapt attention, nor did it deserve to, but it is much more creditable than I remembered. Of course, the first time that I tried to watch it all those years ago, I was hoping for a monster with fang and claw. Now that I'm much older, I've realized that the worst monsters are often the ones who appear to have your best interests at heart.