"Many strange things can be seen." 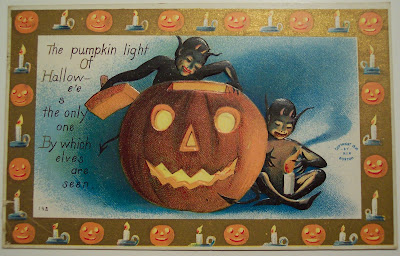 My mother loved all holidays. Whenever the holiday "merch" hit the stores, she was at her happiest. If she saw something cute, it came home with her. The seeing and the action were one and the same. This is why her house is filled with, among many other things, vintage Santa Clauses, bunny rabbits, and, yes, pumphinheads.

As for me, I pretty much only like Halloween. This was the one time of year where I actually enjoyed the annual unveilings in the stores as much as she did, and we both had a lot of fun together on our weekly errands day.

So I was concerned how I would react when the season rolled around and the ghouls and goblins started coming out.

For one thing, I have a hard time accepting the fact that it's already October! It's true that, in the words of Bill Watterson, a year passes like nothing,  and that nothing in the first twenty years of your life prepares you for how quickly the next thirty go by. But the events of this year have been uniquely disorienting. Part of that was my fault.

And as I mentioned in the previous post, when Mr. Death comes knocking and takes someone close to you, the impact can be enough to turn the most hardened Halloween zealots into turncoats.

Looking at it that way, getting out my Halloween stuff and wearing my Halloween ties and shirts and seeing the jack o' lanterns and ghosts and witches and black cats come out in the stores has been more oddly comforting than disturbing. Because Halloween was something we enjoyed together, and because Change has become the overriding theme of this awful year, thinking about Halloween and seeing it has made me feel more wistful than melancholic.

The first real test was the Jo-Ann fabrics store. They always get their holiday items out before anyone else, and one day while doing my weekly shopping at the supermarket, I could see through the display window that Halloween was Up.

I debated about even going in. For about two seconds.

It was noticeably less fun without someone else to compare notes with or point things out to, and a couple of times I found myself saying to my mother, "I wish you were here." But, more than that, I still enjoyed the jolly designs and decorations that they had come up with. I left the store without buying anything, feeling somewhere in the middle realm and wondering about that.

The next time I found a store setting up their Halloween I went in eagerly. I didn't think about whether of not Mom would have loved what she saw. I actually bought a simple yard ornament and put it up that same night. It's something we always did together.

Email ThisBlogThis!Share to TwitterShare to FacebookShare to Pinterest
Labels: Halloween, starting over