An oldie but not a goodie 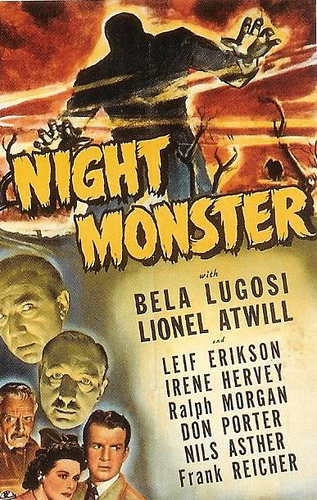 1942's Night Monster from Universal Studios commits the one deadly sin that no movie of its type can afford: it is dead boring! It's got a great cast and the usual state-of-the-art in creepy sets and design, but the problem can be summed up in one credit: "Produced and Directed by Ford Beebe."

Beebe was at best a journeyman B-movie director, professional but uninspired. Of the three Flash Gordon serials, Beebe directed the second, Flash Gordon's Trip to Mars, and it's the worst of the lot.

In Night Monster, he directs as if he's deliberately trying to make the most un-thrilling thriller of all time. Now, perhaps he had the Hayes office looking over his shoulder; in that case, I'm being (slightly) unfair. But, for goodness sake, until the final scene absolutely everything that's even remotely scary happens off-screen, sometimes with the characters pointing to it and hollering "Look!"

I wish that I could! It's true that you don't want to show the monster in detail right up front and spoil your whole game, but in this thing all you ever see is people looking at the ground and saying, "Look at the size of that footprint!"

Bela Lugosi gets top billing for playing a butler, and not even a very sinister one at that. Irene Hervey, way ahead of her time, plays a lady psychologist, but is really just so much window-dressing. Ralph Morgan has the juicy part, or the part that would have been juicy with a more flamboyant director, and he does his best -- but the man isn't allowed even a single close-up!


It took me two nights to get through this thing because I kept falling asleep on it! If only they could bottle it, it would be a great alternative to Sominex. The best and funniest line in the picture comes at the very end, but you'll most likely miss it.

In other pop-culturey activities, I have finally duped every serial in my collection from VHS onto DVD. Towards the end I was getting into some pretty weak stuff, including G-Men Vs. The Black Dragon, a wartime story with Rod Cameron in the lead, and, most laughably, somebody named Nino Pipitone as Haruchi, the leader of a Japanese spy ring. Have you ever heard someone with a heavy Italian accent try to put on a fake Japanese accent? It's quite chucklesome.