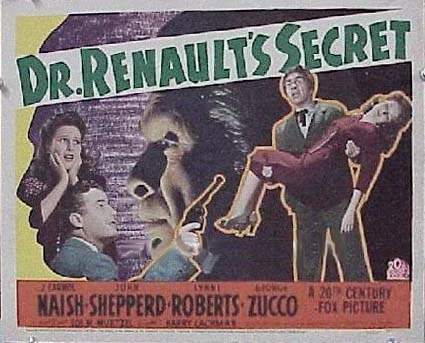 It's been a less-than-thrilling Halloween season for one reason or another. I couldn't decorate the yard early on because of the Big Clean-Out, and now with six days to go, there doesn't seem much point. I haven't been able to pig out on Halloween DVDs because I've felt it more important to spend my evenings working on making the house as comfortable as I can. (I've made some progress on that front, and am spending more time in the living room with the quats, listening to music and working on a scrapbook of the photos I took before the house was taken apart. This would not have been possible before). I haven't been able to read anything because I fall asleep after a sentence or two. And now my DVD player has died -- with one of my discs stuck inside. Anyone know how to pry open the jaws of a dead DVD player?

I did manage to squeeze in Fox's 1942 Dr. Renault's Secret last night. At just over an hour, there isn't much to squeeze. It's a creditable little B-picture that does what it sets out to do, though hamstrung a bit by its deep resemblance to the much more accomplished and more chilling Island of Lost Souls. J. Carroll Naish plays the secret of the  film's title, which makes him both one of the picture's strongest elements and one of its disappointments.

He excelled at playing sympathetic monsters (his hunchback in House of Frankenstein is another great example), and he clearly studied monkey mannerisms for this role. Which makes the secret much too obvious if you're at all familiar with this type of story. It's so obvious that I was hoping there would be an additional wrinkle. If I had been writing this thing, it would have involved the Bad Doctor's daughter. She's the hook that gets the hero involved in the story -- they are engaged to be married.

But -- there's no evidence that she actually has a mother. So I was really hoping that she was going to be the secret of the film's title, another of George Zucco's experiments, and rather a more successful one. I imagine a closing scene involving her and the hero on their wedding night, and a revelation that sends Mister Hero screaming out into the dark. But then I'm sick like that.

It wasn't until a year later that Universal made a girl into the monster for Captive Wild Woman -- another B picture that turns out to be better than it has any right to be. I mean, with a title like that one expects a rank exploitation movie. Instead, what you get is a bit of funhouse frippery that just wants you to think it's an exploitation movie. Oh, we do get to see John Carradine chowing down on the draperies. In fact, Captive Wild Woman may be the picture that inspired Woody Allen to cast him in Everything You Always Wanted to Know About Sex.

I just popped over to Wikipedia to make sure I was spelling Carradine's name correctly. He seems to have died exactly the same way my mother did.

That's neither here nor there. I have to get cracking! It will be a movie a night, every night, in order to get through all the "scary" stuff I have lined up by Halloween. Two more Abbott and Costellos, three more obscure chillers from Fox, and Something Wicked This Way Comes on Halloween night.