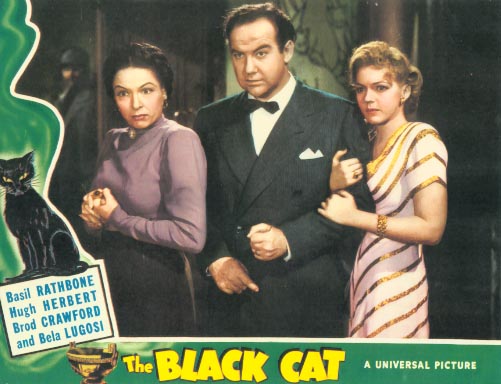 Ray Bradbury is a preacher who lost his faith. A lifelong fan of all things Halloween, Bradbury threw all his pumpkins out into the street when his friend Frederico Fellini died on Halloween day.

Although it's not as fun as it used to be (more on that subject in a later post), I am determined not to suffer the same loss. Every year when October first rolls around, I drop whatever I'm watching and reading and switch to all-spooky fare. This year I am not making an exception. Time to revisit my old friends The Addams Family, Carl Kolchak, Mulder and Scully, and Mr. Serling's Night Gallery.

Time also to break out the new selection of Universal horror movies that arrived a few weeks ago. I bought it to replace my VHS copy of Man Made Monster with Lon Chaney Jr., and for under fifteen bucks I got four other pictures that I'd never seen before.

These are the kind of horror movies I like: atmospheric, moody, with monsters that are more intellectually gruesome than viscerally so. You might as well know that I have deep moral objections to the kind of horror movies they make today, and am appalled that the kind of torture porn that used to be confined to dingy theaters on sidestreets is now commonly available in our suburban cinematechs and our "friendly neighborhood" Wal-Marts. There's something wrong when the DVD aisles of department stores are weltering in gore -- and you know that Wal Mart isn't being particular about who they sell to.

The kind of zombies I like are the kind in Val Lewton's I Walked With a Zombie. For what George Romero did to the culture, I think he should be locked in jail.

The most recent horror movie that I'll watch is Ridley Scott's original Alien. And I prefer to go back much further than that.

This past weekend I visited 1941 twice, first with the aforementioned Man Made Monster. It has all the elements. Chaney plays a sympathetic but simple-minded circus performer who, after surviving a freak electrical accident, is taken in for experimentation by a kindly doctor and his not-so-kindly assistant, well played by Lionel Atwill (I'm hearing whispers that Atwill was kind of a pervert in real life, which lends a layer of squirminess to his work). Soon Chaney is lumbering around in a rubber electrical suit, glowing with electricity, fatal to the touch. Considering the ultra-low budget, even by Universal standards, this is wonderfully atmospheric and ends in tragedy with Chaney's life literally running out on a line.

And on Sunday I braved The Black Cat -- not a remake of the 1934 classic starring Karloff and Lugosi, but a kind of misbegotten "old house" murder mystery with comedic overtones. Bela is in this one, too -- but he has maybe two lines of dialogue and spends most of the picture lurking about, looking through windows. At first the plot was difficult for me, as it concerned a crippled old lady in a big old house full of antiques and cats; pretty much my mother's situation! But then the murders start and everyone begins to act suspiciously, and the secret passages begin to get used with wild abandon. Broderick Crawford is completely miscast as the male lead, but he does try hard. And then there's Hugh Herbert: a very amusing guy and great fun to watch, but what in heck is he doing in this movie?

There are some good moments and as usual the picture looks great; but a lot of the scary stuff is funny and a lot of the funny stuff isn't. By no means is this in the league of The Ghost Breakers (with Bob Hope and Paulette Goddard) or Abbott and Costello Meet Frankenstein -- both of which got the Horror Comedy recipe just exactly right.

For more monster-movie blather from me, just stay tuned. And you can read my essay on Halloween Favorites here at The October Country.