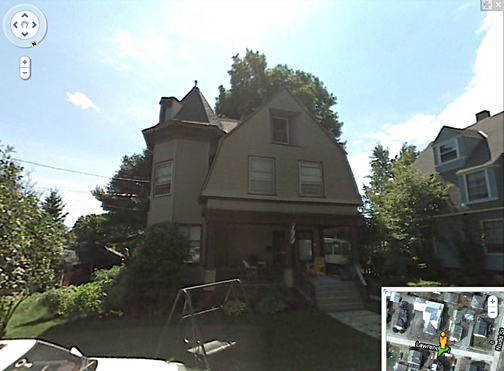 This morning another torrential rain lashed the house, and my anxiety felt like a physical thing, burrowing in the bottom of my stomach, wrapping itself around my spine. You might ask, what am I so afraid of? I'd ask you back, What's not to be afraid of? Everything. I'm afraid of everything.

I normally have a hard time deciding what to have for dinner -- so making a decision about moving out of the house and buying a new home is beyond the pale for me, even when the facts all point to it being the right decision.

Mr. C_______ took me house-hunting yesterday; we viewed five homes over a period of two hours. I discovered that homes all start to look alike after a while.

On my own hook, I had already driven past the Victorian that's pictured above. Lots of character. Price absolutely right. I was prepared to make an offer right away. All it had  to do was to not be terrible inside, to be ready for me to move in.

But there was a reason for the low price. It needs a lot of work in there. They had replaced the roof on the gable, but had not finished the job: the attic rooms were open to the air. They had changed the home heating system to gas since the picture above was taken, and the sides and backs of the house were bordered with three unsightly tanks. There was only one bathroom in the place -- the so-called downstairs half bath was nothing more than a toilet in the unfinished basement. Even Mr. C_____, who was supposed to be selling the place, said that it smelled like a money pit to him. I regretfully struck it off the list.

House #2 was a smaller Victorian, very solid, needing only a paint job. But it had been remodeled sometime in the '60s, beyond the dining room everything was wood-paneled, and upstairs was worse. Not that I have anything against wood paneling in the right context, but it was not right for this 1880's house. The laundry set-up was in a corner of the basement that was too low for me to stand upright in. But there was a finished room on the third floor that would have made a good study. Still, it did not "feel" like the right house for me.

The house was obviously still being lived in. I felt uncomfortable moving through that person's life.

House #4 had a couple of nice features but overall was horrible and depressing as all get out. I don't even want to type about it. The owner has two nice cats, though.

House #5 was on a noisy street, but managed to be quite quiet indoors. It had lovely wood trim throughout, a wood fireplace, a good layout. But the owners had done everything in their power to make it hideous -- wallpaper that looked like it came from a nursing home, plastic wood covering the walls, things that it would not be easy for me to undo.

The only one that felt remotely right was House #3. And of course it's the most expensive one we looked at, but it could be moved into right away. Very cute from the outside. A two-car garage connected to the house by an archway, to keep you dry. A neat back yard, a small back deck. At just over 1700 square feet it feels a hair on the small side. There are two tiny connected living rooms that, if you put them together, would add up to about the size of the front room in my mother's house. It would be cozy. There's a small windowed-in front porch -- I'd prefer it to be screened for my kitties, but the glass isn't a deal-breaker. Three bedrooms upstairs and an upstairs sitting room that would most likely become my study. Five minutes from work; I could come home on my lunch break to give my kitties a treat and a pet. Though dark inside, it still managed to feel cheery. I just don't know if the house can contain me, and all the baggage I carry.

Years and years ago, I had a dream about climbing a glass stairway. Because I could see through the steps, it was vertiginous even at the lower levels. As it spiraled around and up, the steps grew farther and farther apart. Eventually the distance became so great that I had to reach out with my hands and pull myself up to the next step. Then I reached a gap that could not be breached. I tried for it anyway, and found myself stuck, with my hands barely clinging to the step above and my feet slipping on the one below. I could not move backward, I could not move forward. All I could do was hang there staring at the drop below me until my strength gave out.

That's exactly the position I do not want to be in now!
Posted by Freder at 1:46 PM

Email ThisBlogThis!Share to TwitterShare to FacebookShare to Pinterest
Labels: regret, starting over, The New Haus