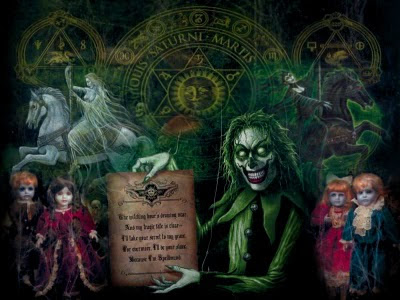 Last night, following my nightly episode of Dark Shadows, I sat in the living room (yet another thing that would not have been possible a couple of weeks ago) and assembled Halloween treat bags with my new Nox Arcana CD playing in accompaniment.

I'm trying to acclimate Tiger Whitestockings to the house and the other cats so I can bring her in full-time. She sat on the floor, cowering beside my feet while I worked. All the cats were a little spooked by my choice of music.

I know little more about Nox Arcana than that it is a two-man group, that the founding member, Joseph Vargo, is also a painter and does all the art for their albums (the above image is a montage of his paintings for Carnival of Lost Souls), and that the group is an offshoot of another goth band, Midnight Syndicate.

A person might go nutty listening to their kind of music all the time, but for Halloween it is great stuff, a kind of new age old gothic style with sound effects and chorale backing. They do create a mood.

The first Nox Arcana album that I tried, last year around this time, was Carnival of Lost Souls, and it was a fortunate place to begin. Each of the albums has a theme, and the guys really knuckled down and got into this one. This sideshow is indeed a gruesome one, and the gypsy fortune teller doesn't have anything positive to say (unless it's that she's absolutely positive that your future looks bleak!). The circus animals are lumbering, nightmare monstrosities lashed on by demons in Harlequin costumes, and I don't even want to think about what's in the Freak Show.

Not all of their albums possess the depth of composition that's on display here. Blackthorn Asylum is a perfect example. This was their new release earlier this year, and I tried it around the time of Walpurgis Night. Unfortunately, despite a couple of effective cuts (their shock therapy cut goes right up and down my backbone), this feels like a rush job. Let's face it, after something like fifteen albums of this stuff (and more coming out all the time -- they've had two releases in the eight months or so since Asylum was issued), it's all going to start to sound the same.

Nonetheless, I tried again this week with their Poe-themed CD, Shadow of the Raven, and this was much better. After one listen, I can tell you that the music has more complexity and is less derivative than Blackthorn Asylum; once again, it may well be due to the theme. Poe is a great subject. You've got the man and his work to build upon, and this album features music based on specific stories and poems that also play as a kind of elegy to the troubled artist.

I was happily putting my treat bags together, petting Whitestockings to let her know that she was among new friends, and most of the other cats were lounging about. Once in a while one of them would come over to check her out.

Then I noticed that Pooky had woken from a sound sleep and was staring nervously at the CD player. Whitey had turned to look at it, too, and his ears were back. Whitestockings was peering around my leg, her whole body tight in anticipation. The next thing I knew, it wasn't music coming out of the CD player anymore, but cats yowling. Whitey actually started. I talked to them, saying "It's OK guys, don't worry, it's not real, it's not real!" -- but the yowling got louder and nastier and scarier and I had to drop what I was doing to keep Whitestockings from launching herself into flight. "It's OK, guys, don't worry, it's okay!"

I was about to get up and hit the fast forward on that puppy when it suddenly ended in silence. Not a moment too soon! "See guys, it's all over! Bad cats are gone! It's OK!"

A couple of them looked at me as if to say, "Don't ever do that again!"

What can I say? It's Halloween at the Duck House, and even in greatly reduced circumstances we are trying to get in the holiday spirit.