It's Fun to Be in the I-OH-O-P (Not!): Questions with No Answers 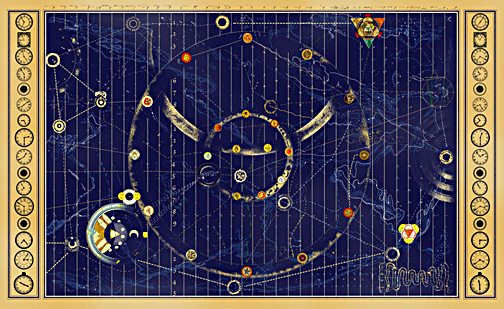 I am cursed with a bitter sense of humor that shows itself at the most inappropriate times, especially in Meetings for the sake of Meetings, Stuck -Up social occasions where people who have no right to take themselves seriously attempt to do so (The Oscars would be a good example of this), and Intensive Outpatient Program sessions that are run more or less by the cookie-cutter book.

Two Wednesdays in a row we have been given a Post-It note and asked to write upon it our names and our current mood. On my first night in the program I didn't know what to expect. For my mood, I wrote down "Terrified" and when it came my turn to say this out loud to the group, the woman running the meeting got an awfully sour look on her face. Her partner said, "Terrified of what?"

I said, "Terrified of everything. What's not to be terrified of?"

The woman running the IOP is a woman who claims to have a sense of humor; but she would not recognize humor if it were jumping up and down in front of her, holding a sign that said "HUMOR" in big red and gold letters.

This week, the two councillors were joined by a trainee, G_____, who is much more savvy, knows how to work the room and get responses, and can tell a joke when he sees it. This week, when it came time to write my name and my mood on that obnoxious yellow post-it note that doesn't actually stick to anything, I wrote: "A 'mood' would be an Emotion, Captain."

Everyone in the room donned either a puzzled, bored, or sour expression except G_____, who was the only one who "got" it. He nodded and smiled and said, "Yes, it would!" I was forced into the position of having to explain myself. I said, "I guess that would be 'irreverent.'"

The councillors knew what I was saying -- but among the "patients" of the IOP I was met with blank stares. "What does that mean?" One of them said. They literally had never heard the word. Even the woman sitting next to me, who works in an attorney's office fer crine out loud, didn't know the word.

I was asked to explain and this really floored me. I thought, What am I, a blasted dictionary? Do I look like Mr. Webster? Why, you pointy-eared, green-blooded aliens, go get yourselves a damn dictionary and look it up! I stammered and hemmed and hawed. I use words with specificity. I never thought of "irreverent" as all that mystifying a word. Yet they were serious. They didn't know what it meant, and I'm not used to having to define words that have been a part of my vocabulary for about 43 years.

Next we were asked to write down our answers to 32 so-called "open-ended" (read "loaded") questions. And because that's the way they do things in the IOP, we had to go around and around the room, all giving our answers. Mine were alternately flip or full of self-hatred, and I think a majority of the room was mystified. When asked to name "something I really like about myself," I wrote: Nothing.

So you see what we have to deal with.

The evening ended with yet another Round-Robin. I hate these. At 4 East, we had discussions. If you had something that you wanted to offer, you were given the opportunity. It was productive and constructive, because, like Mister Ed, people only spoke when they had something to say. Usually it was worth saying, and worth listening to.

A Round-Robin is a completely different animal. The group leader asks a (usually inane) question, and everyone has to answer it, whether they have anything of value to offer or not.

Last night, for the second time, P_____ asked, "What sort of tools do you feel that you need in your Toolbox in order to be successful when you leave this program?"

Inane. Just inane. Not only does the metaphor fall on tin ears to me, but I feel that I was given my sword and shield at 4 East and that it is only up to me now to use them.

I never know how to answer that question. But, thanks to my equally irreverent friend S______, I know how I'm going to answer it when it inevitably comes up next week:

And the final Round Robin question for the evening was an equal Peach: "What have you learned about yourselves this evening?"

I passed. I couldn't say what I was thinking, which was, You mean something that we didn't already know? Not a god-damned thing.

But now that I've written this post and have had a chance to get my thoughts in order, I absolutely know what my answer should have been: That I am not a dictionary and if you don't understand what I'm saying, look it up in your damn Funk & Wagnells!