Welcome to 4 East: The Journal 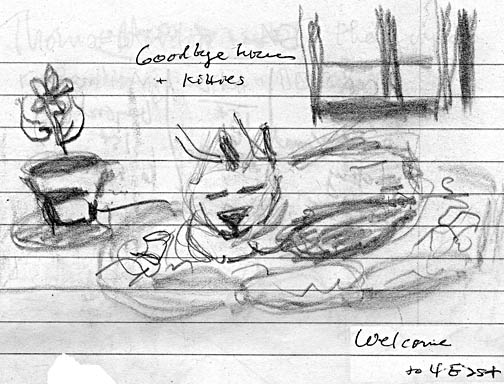 Up until now, I've been writing from memory and have not referenced my journal of 4 East and the I.O.P. at all. Although I've scanned a couple of drawings from the journal to use as illustrations, I haven't felt a particular need to go back and re-read what I wrote in the hospital. But I'm certain now that there are entries worth reproducing in part here, and this is where it starts.

I was not given my journal until my second stay in Detox/Rehab, and the memory of my first stay just a few days prior to that was already fuzzy. Any reference to the first six days has to be considered a reconstruction of something that I barely perceived while it was happening to me. I was told that I was detoxing so hard during the first stay that I was kept sedated; which explains why E____ and other of my visitors often found me curled into a ball, unconscious, when they arrived.

The picture above is from the very first page of my journal, probably scribbled on the first afternoon of my second stay. It seems more than a little bit forlorn to me. The caption reads Good bye house and kitties. . . Welcome to 4 East.

Over on page two is part of a whiteboard chart copied down from my first Substance Abuse group counseling session. It's titled Stages of Change. I didn't even copy down the first column, because I felt, in part by admitting myself, that I had already gone beyond that stage. The other three columns are titled Prep, Action and Maintenance. While I was in 4 East, I went through all of Prep and into the Action. Maintenance still lies ahead of me beyond the first six months. There's also a scribbled word a third of the way down the page that I apparently didn't even understand at the time -- because it has a question mark after it.

On page three, above pencilled drawings of supporting characters from my ex-comic strip Quirk and a standard drawing that I do of a black cat standing behind a pumpkin, is the observation (in ink) that "Thomas Merton is NOT the guy to read when you are in DETOX."

I think that I disagree with that statement now. He's exactly the guy to read when you are in Detox -- although the going is slow and challenging at best!

Most all of my drawings made in the first few days of my stay were made in pencil, and have since already begun to blur and smudge. We were given these godawful little golf pencils to write with. Drawing was difficult enough, especially since I was in active withdrawal for some days early on, but I could not figure out how to hold the bloody things in order to write remotely legibly with them. I considered it a real coup when I asked one of the nurses for her pen, and she actually gave it to me.

The journal has a touch of surrealism to it,.not just in the tone of the cartoons and the shakiness of my handwriting: but I would write in the first few pages one day, and in the middle of the book the next, and then back somewhere in the middle third the next -- until I had so many blank pages in the front that I began filling them in during the final days of my stay. Some entries about the I.O.P. appear well before my first pencil-scribbled entries about Rehab. I flatter myself that it reads a bit like Kurt Vonnegut's idea of how Tralfamadorian novels read.

There's much here worth my remembering, worth my transcribing, at least for my own selfish purposes. Some of it will have to be trimmed, censored, altered. Composed. Re-imagined. But it will be as true as I can make it.