Welcome to 4 East: Not the Beginning

I think the contrast between my thought process in the early and later  days of my second stay at 4 East are well illustrated by the difference between this very crude cartoon I drew at the beginning: 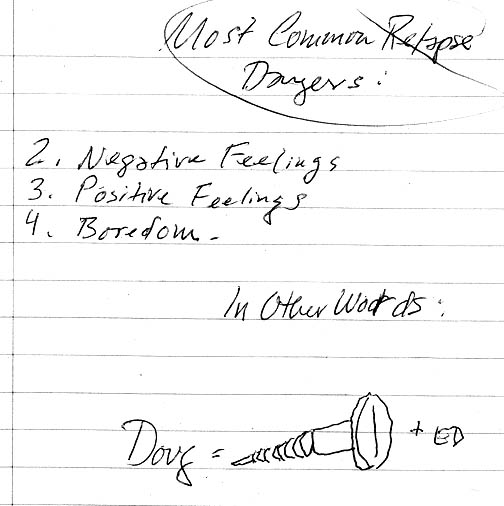 . . . and these only somewhat less crude cartoons that I drew near the end: 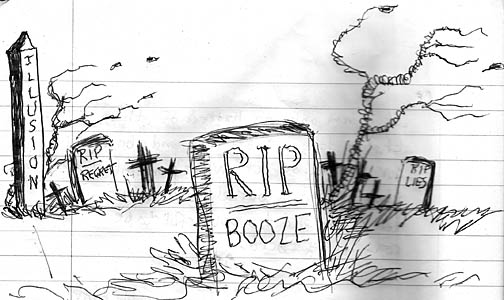 Now I'm going to tell you a joke, and then explain why I'm not going to be the third priest. Becsuae this represents a shift in my thinking, too.

There were these three priests riding together on a train towards some Priestly Function. And for some stupid reason, just because this is a joke that needs a hook, they all decided to take each other's Confessions.

The First Priest said: "Well -- my name is Father A_______ and I'm an alcoholic. Every nigh I drain all the sacred wine dry and every morning I have to go down to the local merchant and replenish the supply. It's gotten so bad that I sometimes have to go four towns over so that the locals don't suspect anything."

The Third Priest said. "Hmmmmm. Very Interesting. My sin? I'm a GOSSIP -- and I can't WAIT to get back to my Parish!!!"

Cute joke. But it represents something real to me now. When I first began my second stay at 4 East and started going to group sessions and started hearing the stories these people had to tell, my first thought was, My God, not only are these stories of Epic struggles, but these are stories that Need to be Told.

By the end of my stay I had completely changed my mind. I realized that to pass on even the smallest details of anyone's story would be a betrayal not just to the program but to the brave, good-hearted people whose lives they represent. Not even my antiquated Victorian devise of picking an initial and following it with blanks (Q_______) would be sufficient: 4 East is too small a world.

If this was a novel it might be differemt: I could combine events and people and add as many completely fictional flairs as I wished, and it wouldn't be a betrayal because it wouldn't be the truth anymore.

But truthfulness is the whole point of what I'm going to be typing here in the coming weeks -- so you won't be getting any Juicy Gossip or learning anyone's private details here.  I can only write about my own personal experiences, and my impressions of the people that I met, and the changes that I experienced during my stay. When I refer to a specific person, I will use a completely ridiculous made-up name like "Trefusis P. Quackhammer" or something silly like that.

After all, you have to hang on to your sense of humor in situations like this.