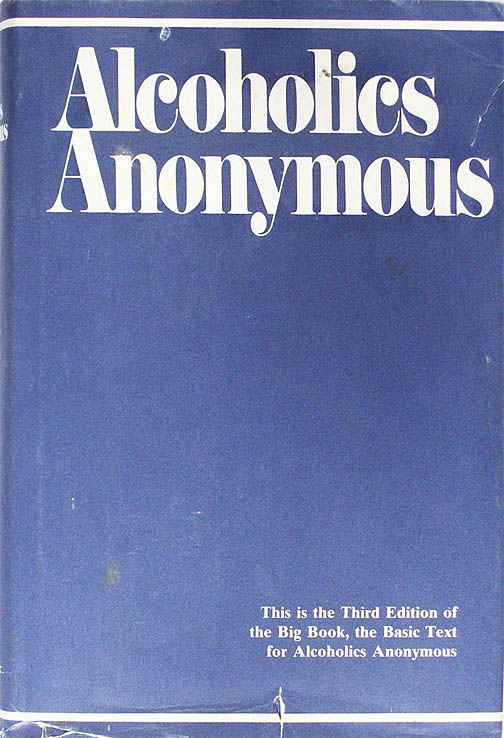 Just back from my third (and last for this week, thank goodness!) official AA meeting. We are required to attend three each week as part of the Intensive Outpatient Program, and for this reason alone I may have to leave the program. I don't knock it -- if it works for 99 out of a hundred people, then it's doing what it's meant to do. But I strongly believe at this early point that I'm the one in a hundred that it's no good for.

The second two meetings at least were not as bad as the first, because I had the sense of get out of there before they all started holding hands and reciting The Lord's Prayer. Now there's a point in itself. They pretend to welcome all beliefs, sects, denominations -- but let's say I were a Muslim Alcoholic. Holding hands and saying the Lord's Prayer would not be cool.

For my part, when it comes to God I don't say yes and I don't say no. I say, "Whatever happens will happen." But I also say: "Don't anyone dare shove your damn religion down my throat because I'll puke it up and shove it right back at you!"

The strongest adherents of AA insist that it's not a religious organization. And yet God is all over the place in AA, and the very structure of the meetings is similar to that of a church service.

Never mind. I can deal with that aspect of it, knowing that it's there, seeing it for what it is -- and also knowing that I do have a Higher Power -- and she works in the building next door. If AA is telling the truth about letting you decide who or what your Higher Power is, they'll just have to accept that.

It's not that I'm an anti-social person, as so many people have misunderstood throughout my life -- it's that I'm a non-social person. Alcohol loosened and opened me up and made me much more social than I truly am. The head psychologist who spent a total of fifteen minutes with me before rushing to judgement after hearing a fraction of my issues was quick to dismiss my self-diagnosis as being someone with a mild case of Asperger's Syndrome, and gave it a completely different name -- more to prove that he was The Boss and would be Making the Calls than for any good reason. Then a third guy came to my room and gave it a third Completely Different name.

And you know what? I no longer care what anyone wants to call it. The fact is that I have a  social disorder, the symptoms of which seem to be pretty much the same across all three diagnoses.

And when I stepped into that first AA meeting on Thursday night, my heart shot up into my throat and it was just as if my soul was lifted out of my adult body and deposited back into the body of that little kid in the First Grade who sought out the most remote, emptiest part of the playground and just sat there in silence, waiting for the bell to ring.

Here was a gymnasium full of people, all of them strangers, not one of whom I could talk to.

My old instincts took hold, and I went straight to the back of the gym, where I sat with my hands pressed between my knees and my shoulders hunched.

If there's anyone left out there who doesn't know how I feel about large gatherings of Strange People (and to me, most Normal People are Strange), I'll refer them to an earlier post on this blog called "A Nightmare of Hell." I went into this meeting in a state of serenity and strength, knowing that alcohol would not be a problem for me that night. I came out of it desperate for a drink, clawed by anxiety and fear, so upset that I shouted out loud and scared Whitey.

Instead of drinking, I took one of my anxiety pills and my last mood-evener of the day, poured myself some ginger ale. By mid-afternoon of the next day I had finally regained my Happy Place, the place where I knew that I was safe from drinking.

But then there was another AA meeting last night, and another this morning, and I sure hope this gets easier as the four weeks in IOP roll on ahead of me. Because if it doesn't, I will be buyig a bottle and relapsing before you can say "Danger Will Robinson!"

Not all solutions work for all people. I understand that most Normal People like Rituals and Large Gatherings -- but I can't stand either one. And since neither AA nor I will change anytime soon, I guess we're about to find out what happens when an Irresistible Force meets an Immovable Object. . .