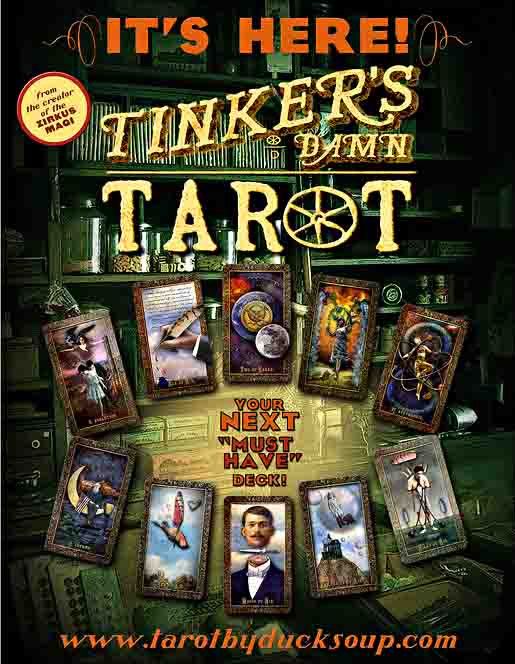 -- a clinking, clattering collection of caliginous cards ... a true occult deck from the Steam Age! This is no Waite-Smith or Thoth clone. Every effort has been made to re-imagine the symbolism to create a completely unique yet easily readable vintage-style Tarot.

Choose from two sizes and 6 alternate card backs at no extra charge.

www.tarotbyducksoup.com
Posted by Freder at 12:31 PM No comments:

Over the past few years, I've tried at least a time or two to extoll the virtues of The Library of American Comics (and have always had a link to their site in my sidebar). Dean Mullaney, my friend Bruce Canwell and their tiny crew of support people have been keeping the best classic newspaper comics alive for years now, and they keep on growing. If you like comics at all, walking into a room lined with shelves full of their books is like reaching Nirvana. If you've never heard of them, here's a very short new video to give you the barest sense of what they are about. Watch it -- and then head on over to their site: http://libraryofamericancomics.com. You won't regret it: and once you hold one of their tabloid-sized hardcovers in your hands, you won't believe how gorgeous they are. In fact, I'm behind on where I want to be with their books, and need to order up a few myself.

Thanks to the blog largely written by Mr. Canwell, the site is a wealth of information and entertainment, too. Go there now!

-- Freder
www.ducksoup.me
www.tarotbyducksoup.com
Posted by Freder at 5:59 PM No comments:

Art as The Mean Kid At the End of The Block 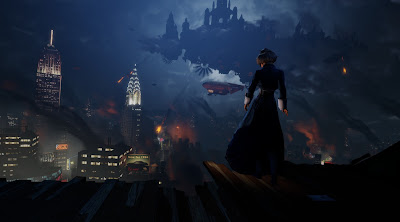 If we judge Art by how it makes you feel, then there’s no question that some Art plays the same role as the big Bully on the block, kicking you around and hurting your feelings for its own amusement.

As the title suggests, La Vie En Rose is a biopic about the French singer Edith Piaf — The Little Sparrow, the tiny woman with the big, tremulous voice whose music made strong men weep. The film is well made, and successful at immersing the viewer in her Times and Places. But somewhere along the way, you begin to realize that the singer is not actually a very interesting person — certainly not nearly as interesting as the Times and Places that she was living in. She had her talent, which was undeniable; she had a certain fragility, which was attractive; she was loyal to so-called “friends” who deserved nothing in the way of loyalty; but she seems not to have been the brightest bulb in the socket, nor the most engaging of personalities, to put it mildly. La Vie En Rose is very much like meeting a person you once idolized, only to find that they were no different from the next-door neighbor that you dislike intensely.

It’s true that just because a person has an enormous talent for something doesn’t make them a successful person, and Piaf fits that bill with room to spare. For considerably more than two hours, we watch her abuse alcohol, abuse morphine, abuse cars, and abuse the people around her; and then we watch her die.

Marion Cotillard, who really looks nothing like Piaf, takes a wild joyride in the part: if it didn’t feel so genuine, it would be miles over the top. She’s particularly successful in evoking the woman’s physical degeneration: Piaf died at age 47 from the effects of Too Much Life.

The movie glosses over the years of World War II, so much so that we’re not even aware of the war having happened. This was an important time in Piaf’s career: she appears to have gotten along famously with the Nazis occupying France and was tried as a collaborator after the fact. None of this is touched upon. The movie is far more interested in her fragility, and it’s the fragility that it hammers home with relentless sledgehammer strokes. Even as The Sparrow, with enormous effort, pulls herself together for one final, triumphant appearance, the spectre of Death looms over her with all the subtlety of an approaching Sherman Tank. When all’s said and done, La Vie En Rose is a portrait of beauty that’s fleet, effort that futile, life that is empty and full of regret. It’s an exceedingly depressing venture that will stay with you for days.

In the world of computer and video games, Bioshock Infinite stands virtually alone as Genuine Art, as one of a sparse handful of works in this relatively young media-form that aspires to be Art, and in aspiring achieves the goal. Its nearest competition is its own progenitor, Bioshock, which I’ve already written about here on the blog.

That game placed the genre of the first-person shooter within the context of a socio-political argument, wrapped in a dazzling 1930’s Art Deco atmosphere. It was virtually an essay on how Ayn Rand objectivism is almost literally designed to fail. As the title suggests, Bioshock Infinite aspires to take everything farther and higher, and to show us the dark side of the Great American Conceit. But if Edith Piaf had too much heart and very few brains, Bioshock Infinite has enough brain to pass as a Physics Symposium, and no heart at all.

We find ourselves immersed in “Columbia” — an idealized American dream-city of the twenties, all Manifest Destiny and Righteous Good, literally an Edwardian-era Disneyland floating in the clouds; but as we investigate in the early parts of the game, we uncover the nasty truth that its vision of Equality and Justice applies only if one is White and Christian. However, Infinite doesn’t stop there. Over the course of many hours of gameplay, a resistance movement swells to take over the city and reverse its fortunes; and we learn painfully that violence begets violence, and that what replaces a despotic government may be just as bad as what it’s replacing. Wounds that are old and run deep will out in the end: and Bioshock Infinite offers no solutions or easy outs in the gigantic question of how to build a society that works for all of the people who live in it.

It’s a hefty dose of message for a computer game, and in the end Bioshock Infinite stumbles and falls under its own weight. It’s more than a little bit disingenuous to present the message that violence begets violence in the context of a first-person shooter, where by definition the only way for a player to advance through the story is to gun down everyone in sight. You get the sense that the game makers are congratulating themselves on their own cleverness; and it doesn’t stop there.

As the title implies, Bioshock Infinite is not content to tell one story: it unfolds, quite literally, across an infinite number of parallel universes, with a potentially infinite number of outcomes that all boil down to one thing: that the character you are playing needs to be taken back in time and drowned in a Baptismal pool in order to prevent the events in the game from happening.

To re-use a phrase I stole from my best friend and have used again and again, if it were a book you’d throw it across the room in frustration. I stopped caring what happened at the moment that we passed through the first “tear” in reality: because the story that I was invested in suddenly ceased to exist. You enter a different story at that point — and then another and another, and with each “shift” Bioshock Infinite loses weight. All the heart that it has invested into its two main characters goes straight out the window, and suddenly the game becomes an exercise in intellectual masturbation.

As a game, as a shooter, Bioshock Infinite is no less disheartening. There is something infinitely depressing about all of its stunning vintage Americana and the way that it’s been subverted to bludgeon you into a state of insensebility. The first time that you’re attacked by George Washington or Ben Franklin it’s an amusing bit with a touch of sour; the nine hundredth time that it happens, it’s just sad and exhausting. As a game, more than any other shooter that I’ve played, and despite the most beautiful art direction in the business, Bioshock is ultimately a dismal assault on the senses.

Unlike a hundred others of its type, Bioshock is Art. In a sense, it’s great art. But it’s Art of a savage sort, the art of Thuggery: eager to impress you, and just as eager to beat you up and laugh at your incomprehension and misery.

— Freder
www.ducksoup.me
www.tarotbyducksoup.com
Posted by Freder at 12:25 PM No comments: