Welcome to 4 East: On Visitors 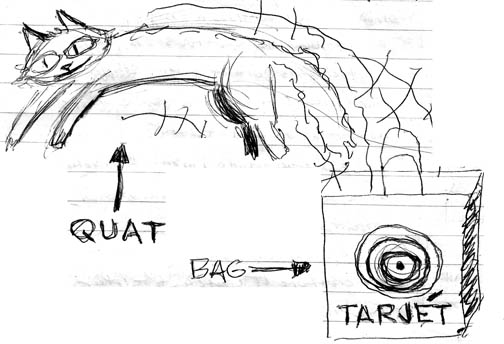 Without any doubt, the most Stomach- churning, heart-in-my-throat, shit-in-my-pants moment at 4 East came when I was paged by the nurse's station -- only to discover that I had a visitor, and that visitor was my boss.

My employer has a very tough, no-second-chances policy when it comes to drinking, which is why I took such care every morning to at least not smell the part. Normally I did not drink in the morning, but if by some chance some vodka managed to arm-wrestle its way into my orange juice, I knew that some thorough Oral Hygiene mixed with either peanuts or corn chips would do the trick.

On the other hand -- anyone who knows me knows the stresses that I have had with my current boss, knows that in the past I have dubbed her irreparably inhuman, sadistic even, and that it's not just me: every single person who works for her feels the same way. I have seen student workers actually dance when they were told that she would be out for a few days. I myself have not been above a whispered "Yessss!" and an air-pump at such news, and I get laughter every time I do it, no matter who I'm talking to. Everyone agrees.

So you can imagine my horror as I waited behind the red line and watched as she was admitted onto the ward. She came through the door and gave me that same smile that a snake gives before it devours its prey. Then she said, "You look good."

I said, "Are you crazy?" I had a four-day growth of beard, my hair was scraggly and uncombed, and I'd been wearing the same clothes since I'd been admitted. Everything was clean, but I still felt and looked like a hobo.

Instead, she had come to tell me that they were drawing up Family Medical Leave papers so that I could keep my job and continue paying into my insurance policy in case I ran out of vacation and sick days. Later, H_____ told me that he'd found her "really nice." Well, dude, she was on her best behaviour, but still and all it came as quite a shock to the system.

It doesn't make things easy for visitors that 4 East serves dinner at 4:30 in the afternoon. Not only does this  make the evenings long, but it makes it almost certain that your visitors are going to show up while you're eating. Sometimes I'd be rude and push on through the meal while we chatted; sometimes I'd be polite, and have a cold dinner waiting for me when they left. The most comical example of this came when my old boss E____ came to visit during dinner, and was shortly joined by my current boss (back for another round? Back to perpetrate some evil that she hadn't been able to the time before thanks to my other guests? Whatever the reason, she seemed disappointed that I had company to protect me once again.)

Anyhow -- both of these women are in the book business, and both are managers of small, independent stores (E_____ owns hers) -- and E_____ was sitting to my left and my current boss was sitting to my right, and it wasn't too long before the shop talk was flying past me right and left. They were comparing notes, exchanging news, thinking out loud about current trends and suchlike. And it went on for a long time, with me in the middle wondering when I could get back to my dinner. At some point my roommate came in and flopped on his bed -- I wondered what he was making of all this. After, honestly, ten or fifteen minutes of the two of them talking across me about the book business I started to have thoughts along the lines of "Hello! Alcoholic in the room! I'm here!" and "Why don't you two just do a book convention together and let me eat my dinner in peace?"

It was amusing, to say the least.

I was always glad to have visitors, always glad to be reminded that there are people out there who care about me, but in one respect alone I did sometimes feel somewhat guilty about it. This is because I believe that I had more visitors than anyone on the floor. and I know that I had more visitors than my roommate, who had none. Ever. The entire time he was in 4 East. He was, underneath the tattoos and the scary appearance, a nice, decent man who had lost his way a long time before and who was paying for it now in a big way. He'd come up to me and say, "Boy, you had a lot of folks visiting you today!" And I could tell that although he meant it in a nice way, it made him sad that he had no one "out there" who gave a shit, no one who could even be bothered to visit him.

This makes me even more grateful to everyone who took time out of their day to stop by 4 East and see how I was doing, especially BC, who drove all the way up from another state for what must have been a not-very-much-fun twenty minutes or so. The day that he came up, I came out of a group session and there were the three of them sitting at a lunch table in the commons room. I literally did a double take, not expecting to see my friends in that place.

Even then, it took my favorite person on the staff, the one I've less than accurately called Joan Arkwright in these posts, to remind me of It's a Wonderful Life and specifically of Clarence's gift to the Jimmy Stewart character at the end. She had a way of saying things that made me dissolve into tears.