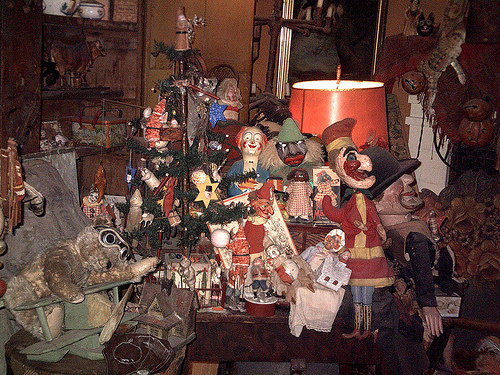 Monday morning around ten, and for at least two days afterward, the auction house will be at my home taking it all down. I know that during the day, my concern will not be about grief management, but on the logistics of six or more people all coming and going from the house through at least two entrances.

Their plan is to set up tables in the front yard (for this reason I have been unable to put out Halloween decorations). Two people will come into the house and start picking. Two people will act as runners, carrying the items out of the house to the two people manning the tables. These last will sort the items into lots, then pack and load everything onto the truck.

I've been trying to get the house ready for them, emptying drawers and more, but many of the desks and dressers and closets are actually inaccessible to me, which means that this will be an ongoing job. Also, I have no room to store anything that comes out of these places -- I will have to deal with it as space gradually opens up.

I have had to make plans of my own. Wanting not to worry all day about the cats getting out, I decided to lock them in my rooms upstairs, two in the bathroom and three in my bedroom, being mindful of matching the personalities to avoid cat warfare. I may have to switch them out a couple of times, as I'm not about to put a cat tray in my bedroom -- that's an idea I do NOT want to put into their heads! Likewise, Pooky will have to stay in the bathroom all day. I am not having her poop all over my sheets!

I plan on taking a lot of pictures. That's probably the best thing about digital cameras -- you don't have to worry about wasting film.

I know that it will be a long, busy day, and that I most likely will not have time to think much about what's happening. My father has said that he's going to be there for moral support; if he stays true to form, he will actually try to take over and run the operation. Then it will be my job to channel him in some other direction. That's all right. One more distraction for me.

My biggest fear is that my sister will find out what's happening and try to disrupt the process. I know that she wanted to lay claim to certain items, and until I found out that she was stealing from the house I would not have stood in the way of this. But things are different now. My position is that she made her choices and took them. She doesn't get to pick any more. She gave up that right. If she complains, I will happily tell her, "You're perfectly free to bid on things."

I had to swear my father to secrecy on the dates before I would tell him anything. I believe Monday will be safe. But her husband will be at home and he frequently drives down my road, and I fear that he or one of the kids will find out what's happening and convey the news to Claudia. This could make Tuesday or Wednesday a little sticky. If she turns up, I will ask her as politely as possible to leave. If she doesn't, I will call the state police.

At the end of the day, everyone will go away, and I will be left alone with the cats to clean up and deal with what remains. That's when I expect the tears to come.
Posted by Freder at 4:21 PM