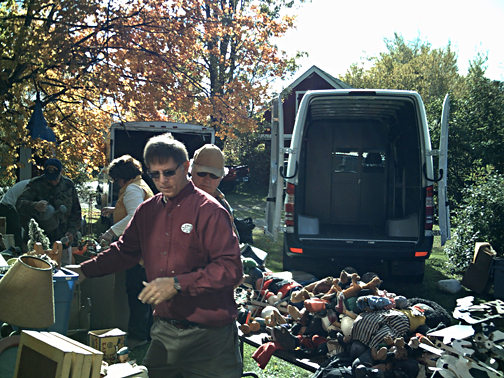 It was a bit of black humor on Monday morning to go to my Halloween countdown calendar and discover that the picture for that day was a witch's broom, sweeping stars.

I rose early, did my morning chores as normal, and at about 8:30 started rounding up cats.

Honey and Pooky went into the bathroom, Patches, Pandy Bear and Whitey went into my bedroom. Patches was the only one who resisted, but the minute I closed the door on them they realized that something was not right. As I popped each succeeding cat into the room, it got harder and harder to keep them inside while I shut the door.

I went out and sat at the table sipping on my ginger ale, waiting for them to come.

Sue C_______ was the first. She is the paralegal who works with my lawyer, and was there for moral and practical support. Then Mr. J_____ himself arrived. The head honcho. He likes to hear himself talk and immediately took command of the conversation with stories from his life.and profession. It went on for what seemed like a long time before the trucks began to pull in.

We stood at the back door and Mr. J______ made a discreet speech about my mother and about the task that his staff faced and how they were going to go about it. He had to keep starting over again because more people kept arriving, including my father and my lawyer, Joanne A_____, who as always gave me a big hug. I'm certain that I looked like I needed it.

From the bathroom window upstairs I could hear Pooky wailing. I had expected to see Honey sitting in that window, as it's one of her favorite spots, but she never appeared.

Then the show began. On that first day, it was my mistake to position myself in the yard to watch the things being carried out of the house. When the first item came out of the door I burst into tears and had to hide.

It started as a trickle and turned into a flood. Things were coming out so fast that I couldn't keep track. Soon I realized that they weren't just taking things of value -- they were taking everything.

They took her telephone. I caught this and saved it. They took her Dustbuster. They took her bag full of prosthetic socks. They took electric fans. I had told all of them that I still lived in the house and hoped they would leave me with some furniture and other practical things; either they didn't listen to me, or they had been told to clear the place out to the bare walls.

They took our broom. Why? They took my hammer. Why? I began prowling the yard, which with its tables full of things and boxes on the ground was beginning to look like a flea market, trying to find things and rescue them.

Inside the house was chaos. They toy man, Andrew, was ripping things down so carelessly that other objects were falling to the floor, where they broke or were stepped upon. He would pull things out of the arrangements, and if he decided not to take it he would toss it aside carelessly. Dolls lost their hats, arms, legs. Sets were broken up. It seemed to me that they didn't even know what they were looking at.

The rugs were all tossed out and the dirt underneath them began to spread absolutely everywhere. If it was clean when they started, it was filthy when they left.

I felt so powerless and every so often broke down in tears again.

Mr. J_____ was personally sorting every item that came out of the house, first deciding if he was going to take the item, or pass it off to his brother-in-law's auction house, then sorting what he wanted into groups.

Sue kept on trying to impress on me that as executor, I had the power to keep anything I wanted, but the message was largely not sinking in. I was too distracted and distraught.

Around noon I went upstairs to switch out Honey and Patchy. I first I couldn't find Honey at all, and thought, how could she disappear? It turned out that she was cowering in the bathtub, trying to make herself as small as possible. She looked up wt me with a terrified expression. I was going to switch out Whitey as well, so that he could get access the cat tray, but as soon as I closed the door on him he began wailing. I put him back in my room.

Throughout the afternoon it was more of the same. One half of the crew ripped things out of the kitchen and then moved into the dining and living room; the other half started in the hall and worked their way into my mother's bedroom.

They took the things that she had made even though I had asked them not to. So again I had to be on my toes, going from bin to bin, trying to save pieces of her from going.

And so on, as Mr. Vonnegut says.

They stopped taking things out of the house at four-thirty, and concentrated on processing what was already out. I went up and let the cats out.

Honey came out of the room and went shooting down the stairs like a rocket into the front of the house. Pandy Bear and Patchy were completely mellow. But Whitey was hiding under my bed and afraid to come out.

As I carried their food plates to the kitchen, I met Honey coming back. She was running at top speed through the half-stripped living room, keeping low to the ground as though she was trying to hide and run at the same time. When she saw me she stopped dead in her tracks and looked up at me with her eyes as big as saucers, as if to say, "What have YOU DONE??!!"

What, indeed, had I done? Something horrible, that I could never change.
Posted by Freder at 3:34 PM