The Wolf in My Sister's Clothing 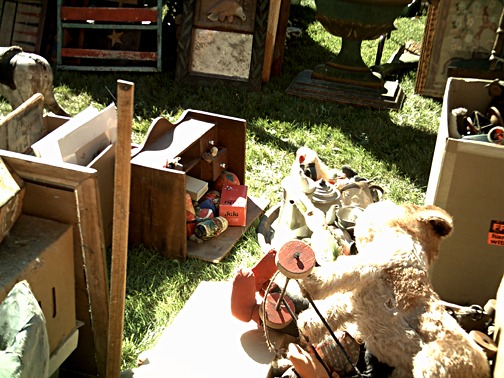 Sunday was my first opportunity to spend a whole day giving the house a good beating.

I vacuumed, swept, and scrubbed the floors in the living room and the kitchen, then vacuumed in the front room, front hall and office. Brought some things downstairs in a futile attempt to make the place more homey. I was actually feeling somewhat cheerful then, because at the time I still had ahead of me the definite prospect of moving on to a new place.

Given that I didn't believe I would live here much longer, I had made an offer to my sister and her husband. They are facing the reality of losing their home due to the mortgage he took out on the place when he built his "resort" (actually, it was a nudist colony which, predictably, failed in a big way. What kind of genius puts a nudist colony in an upper-central Maine farm field where half of the year it is freezing and the other half of the year the black flies hold sway?). Tony had built a little workshop near their house, and now he was at work expending it and turning it into something they could live in, but it will never be anything more than a shack.

I told them they could move in to my mother's house, rent free, for a time. In return, Tony could do a little work on the house, and everyone would benefit from that. Tony wanted to come over and look at the house. Claudia was going to stay away because she knows I hate her, but I needed her to come over and go through our mother's clothes to see if she wanted anything. The rest would go to Goodwill or Kenaset or the Salvation Army or someplace like that.

I was looking forward to seeing her reaction to the house, and the state that they had left the place in. I wanted her to see exactly what she'd made me do.

But I was disappointed. She walked through the door -- and didn't react at all.

Not even a widening of her eyes.

If anything, she looked satisfied.

Tony went into the upstairs rooms through the back (something that hasn't been possible in at least two decades), and I went into our mother's room to get Claudia started. Before she even looked at anything, she said "My husband won't let me wear anything Mickey Mouse."

It was a pointless comment as I'd already taken out all the Mickey tees and sweatshirts and nightshirts for myself.

I followed Tony and walked him through the place, pointing out some of the damage. When we were done he went to look at the place from the outside.

Claudia was pretending to look at my mothers coats.

She volunteered to help me move. I don't want her help. I don't even want her to know where I end up. I want to be done with her forever. There has to be one good thing to come out of this nightmare.

When they left she asked for a hug. There is no limit to her hypocrisy, and no shame attached to anything she does. Everything is somehow justified in her mind, even the most outrageous violations of faith, trust and personal property. I reluctantly allowed her to hug me, waiting all the while for the knife to slide between my shoulder blades. I didn't hug her back.

When I stepped back indoors I went straight to my mother's closets. I had made a point to taking anything of real value out before Claudia arrived, and of memorizing the way everything in there was laid out. All of the boxes of costume jewelry had been disturbed, both on the shelves and on the floor.

Claudia had not been going through the clothes at all. She'd been rifling the boxes, looking for valuable jewelry.
Posted by Freder at 12:27 PM

Email ThisBlogThis!Share to TwitterShare to FacebookShare to Pinterest
Labels: the assault, the wolf