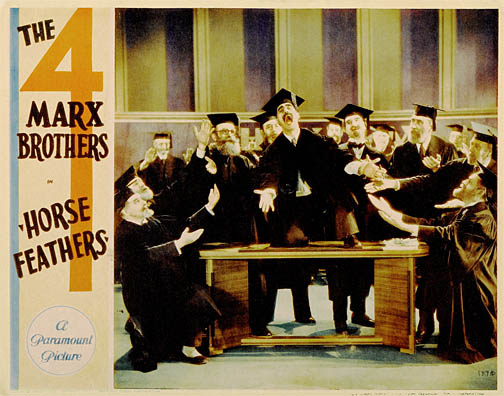 How many years since the last time I watched Horse Feathers, one of my favorite Marx Brothers vehicles? Decades. I'd forgotten so much about it -- and had never understood parts of it. The term "College Widow" -- as applied to the lovely Thelma Todd -- baffled me and sent me to the internet to find a definition. Ah, now I get it!

But I'm afraid the Marx Brothers are to some extent wearing out their welcome with me as I get older. I used to love their anarchic spirit, but lately I've been putting myself in the shoes of their helpless victims and thinking how annoying it would be to have these guys around.

Let me put it another way. In the second half of the movie, when the Brothers are for the most part interacting just with each other and with Miss Todd (and the thug football players) -- I LOVE that stuff. Margaret Dumont works for me, too, although she's not in this picture. But when the boys are perpetrating their madness among otherwise Innocent civilians (like the girls in the classroom here), they lose me. It seems unfair, the same way it would be if Bugs Bunny were to step in and take over the campus. Normal People are no match for the Marx Brothers. They don't stand a chance. There's an element of bullying in the Marx Brothers, as if Superior Alien Beings have descended among us and are taking the planet over.

That said, I still love Horse Feathers when it gets going. Maybe it's the Romantic angle, and thanks to the song "Everyone Says I Love You," it's a GENUINE Romantic angle. Each one of the brothers gets to sing (or in the case of Harpo, play -- but he makes the harp sing for him) their own version of it to Thelma Todd, each with their own lyrics, and each time it's kind of crazy and goofy and wonderful all at once. It's not often that Groucho gets a genuinely Romantic scene; here there's a wistful quavering to his voice that sells the moment.

Todd was also a frequent foil for Laurel and Hardy, and she must have been made of pretty strong stuff to put up with so much (very physical) wooing from so many Marx Brothers. The final fade-out is a little bit horrifying if you think about it: that's one wedding night that doesn't bear imagining!

Harpo is still my favorite Marx Brother, and this makes more sense to me now in the light of my probable mild Asperger's. He's the most alien of them, but also the most soulful. HIs humour is all sight, none of the rapid-fire patter of Groucho and Chico that often goes zooming past me at the speed of light. To some extent the talking Marxes cause a reaction in me much like the stunned students and faculty at their mercy: all one can do is stand agape, staring, and wonder where it's all going to end.