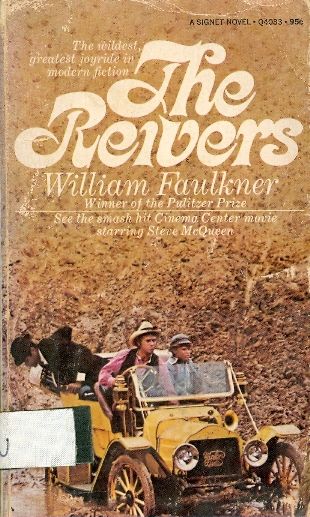 Not much in the way of pop-culture blather to report. Last night TCM ran Mark Rydell's film adaptation of William Faulkner's last novel, The Reivers, but I tuned in late, and it was dinnertime so I was away from the telly for most of it. In any case, I realized that my memories of the novel were too vague for me to have any meaningful notion of how good an adaptation it was. I must have read the book at least a quarter-century ago, and I admit I didn't get as much out of it as I should have. I was a big fan of Faulkner's, and went into it with the wrong set of expectations, not realizing until many years later that it was intended to be a comedy, not the kind of southern gothic drama that I was used to from Uncle Billy. I kept asking myself, as I read, what was wrong with this picture? Well, what was wrong was me.

Beyond that, all I can say for certain is that Steve McQueen seems an odd choice for Boon Hogganbeck, but Will Geer is just perfect for Faulkner, and Burgess Meredith's narrations are a pleasure.

After that, I watched just enough of last year's "re-imagining" of Sherlock Holmes to know that it wasn't worth wasting any time out of  my life over. I normally like Robert Downey, Jr., but he's woefully miscast here, and with his fake British accent I couldn't understand a word he was saying. That was actually the best part of the movie. I could tell from the opening frames that this was going to be a stink bomb, but I toughed out about ten or fifteen minutes before I turned off the set and got back to unpacking.

Oh, and I did sit through the remake of Ray Harrihausen's Clash of the Titans on Saturday night. It's better acted and more dramatically sound than the original (Lord Olivier really sleepwalked through that one), although it's still quite nonsensical -- and I'm sorry, but although it allows the director more fluidity in which to frame a shot, the computer-generated special effects don't hold a candle to Harryhausen's techniques.

I spent most of Saturday and Sunday at the old house, packing and packing so that I would have enough not just for a load each day, but enough so that I could swing by on Monday and Tuesday and just load up the car without having to take the time to pack more. I'm really making strides. All my books are packed, the big closet is cleaned out, the built-in shelves are bare. The house is growing more and more eerie, an empty, silent place. I believe that I'll only need a couple more weekends to pack up everything that's coming with me. Then the auction house needs to be called back in, to clean out what they want. Still, there will be quite a lot left over. My lawyer says she knows someone who will take the rest. But I'm tempted to just throw the keys in my sister's face and say to her, "It's all yours. Take anything you want and clean the rest out, give the keys to the new owners when they come. I'm never coming back."

I was able to get a light carriage sofa into my car, now the cats have something comfortable to sit on in the new house. I'll have to move it when the real furniture comes in, but for now they like it much better than just a blanket on the floor!

The move is scheduled for Wednesday. Of course, the weather weenies are predicting snow. I've reached the point where I don't care. I need my furniture now. If the moving company cancels on me one more time, I'm going to use a different moving company. I can't find anything because I can't unpack. Boxes are piling up where the furniture must go. This move has reached critical mass.

I enjoy living in town. I've typed this before, but it bears repeating: winters at the old house were made harder by the feeling of living on the moon, being in the middle of nowhere. Our nearest neighbors were half a mile away. The forests and fields were barren and still when covered by snow. I would look out of the windows on a soundless night and feel completely alone.

In town, it never gets completely dark. There's a streetlight at the end of my driveway, and many of my neighbors never turn off their porch lights. I'm sure that the Tigers Whitestockings and Grumpyface appreciate this, as do I. There's an ambient glow to the night sky from all the lights, public and private. I look out of the windows and see just enough trees and woodland to make it seem homey and comfortable, but I also see the homes of neighbors, windows discreetly curtained, and cars rolling up and down the hill. I am still alone, but I am alone in the world instead of out of it.
Posted by Freder at 12:56 PM

Email ThisBlogThis!Share to TwitterShare to FacebookShare to Pinterest
Labels: movies, moving, starting over