The Light at the End 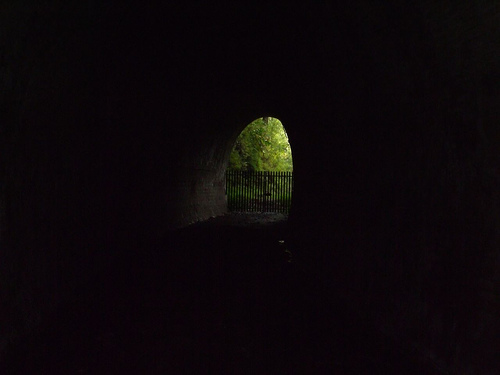 It's nearly over at the old house.

It's hard to believe, really. . . Everything from the house is moved.

I made my last sweep through the basement, workshop and generator room. As expected, there wasn't much that I wanted: barring only the laundry that was hanging on the line and piled in the sinks, the things I took didn't even fill two boxes. I expected to find more tools and useful things in the workshop than what I did. Most likely, my sister or the auctioneers beat me to them.

The whole sweep took less than an hour. I brought one load back with me on Saturday, then made three trips out and back on Sunday, clearing out not just the things in the house, but a good chunk of the yard ornaments in the big barn. This last required a lot of repacking and fussing during the final load of the day. There were particular things that needed to come out right away. With the barn now shoveled out and no padlock on the doors, my sense was that I'd better take the things that meant the most to me, because they might not be there when I get back.

My car is still full, because I can't fit anything more into the house. The laundry room that I'm using as a staging area is full to the ceiling with boxes, baskets, totes, and even a Christmas Tree. Some of it (like the tree) is going straight up to the attic. That's Job One for me tonight.

I still have to get the auctioneers over to the old place, let them have their last sweep through, and then I will be ready to turn the keys over to the new owners. I'm actually looking forward to that. Heating two large houses is for the birds!

I got through it mostly without tears. I learned that controlling the tears meant controlling my thoughts. If I thought too long about the fact that this was it, the end, done, that this was basically my Good-bye to the house and all the years that it contains, then I'd break down, every time. But if I just kept focused on the task, the packing, the loading, the seeing to it that I had everything I needed and that it all went into the car in the right order (the last of the plants, including the old geranium, had to be the last into the car, due to the cold) -- then I was all right.

By the time I'd been out and back three times, I knew I'd put in a day's work. It was time to kick back. My dinner came out of the freezer. I flopped into my office chair and launched one of the cheap games that I picked up the day before at Wallyworld, just so that I would have something that I could actually do with the new computer. Killed an hour. Watched an episode of Dark Shadows (one of their more turgid efforts: yeah, guys, we get that Maggie has been attacked by a very special vampire). Enjoyed having Patches and Whitey sit on my lap in the new home. Walked through the place and looked at everything I've done over the last two months. Discovered that the sofa in front of the bay window is a really neat space, and one where I will want to spend some vacation time, just reading. It looks out over the drive at the row of pine trees lit by the street lamp.

Just under two months. Even though there's much left to do (and still no phone or internet!) the quats and I are firmly installed in the new diggs. The past is the past. Over. I just have to keep on plodding towards the light.
Posted by Freder at 3:49 PM