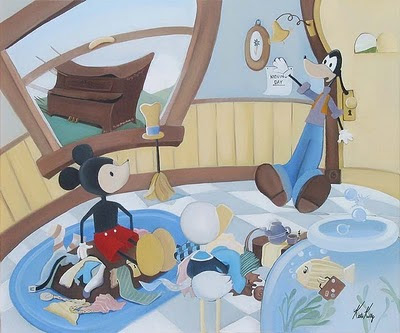 Laurel and Hardy did it. Mickey Mouse did it. I'm surprised that the Three Stooges never did. By definition, comedy usually involves pain. The kind of pain that isn't so funny when it happens to you!

But, really, the final phase of the formal move came off as well as could be expected. I now have furniture!

When I saw the truck pull up I grabbed the cats before they could know what was happening and locked them away again in the bathroom. Much complaining from behind the door! Then I noted that the truck had not pulled up in front of the house as expected, but backed into the driveway.

I was told that the town would not let them park in the street, and that I would have to shovel the sidewalk. I said, "That's baloney! I've seen at least two moving vans parked in front of this house in the last six months! They do it all the time! It'll take me an hour to shovel this out!"

In the end, they parked in front of the house and started off-loading, and I got busy shoveling in case a cop came along and ordered them away. A cop did come along, but he paid them no attention, and I shoveled the sidewalk for nothing (the town snowblower came down the walk just a short while after I finished!)

The movers poured sand all up and down my front walkway and soon were tracking it into the house with wild abandon. Footprints everywhere. I still haven't cleaned it up; I had higher priorities. Once again Mister Complainer let his partner do the lion's share of the heavy lifting.I pitched in and lugged a bunch of stuff myself. After all, they were being paid by the hour. We loaded up the house, then they moved the van and we put the lawnmower and wheelbarrow and the garden dog and my mother's flats (display pieces that she painted to look like buildings -- she used them at art shows to display her paintings way, way back when she was pursuing art full-time while raising us youngsters) into the garage.

They came inside and assembled the beds, starting with mine. As soon as it was ready I made it up, and flopped down on it in relief. I said, out loud to the room, "This is hot!"

Honey was first out the door as usual, zooming at slightly under the speed of sound, but doing it in that low, distressed crouch. "What's he done now? What's he done now?" she seemed to be thinking. I followed her upstairs. She jumped on the bed with a look of disbelief, sniffing about. "Is it? Is it really?"

Downstairs Patches was not asking questions. She knew, and was jumping on every single piece of furniture with a happy look on her face. Everyone else was sniffing, but contentment was the overall tone.

For my part, I felt suddenly exhausted, almost too weak to stand. I flopped in my comfy chair before the telly and just sank into it. I hadn't been that comfortable in a solid month. I turned on TCM.

I must say that TCM is becoming my favorite channel. In the early days of video and DVD, it was a pleasure to track down movies that I knew about and knew that I wanted to see, but TCM is a different experience entirely: I'm getting to see pictures that I never heard of, never knew I would like. Yesterday it was Two Knights from Booklyn, a 1949 comedy with William Bendix and Grace Bradley (an actress I've never encountered before that I know of, but man-o-man, whatta cutie!). It was pretty dumb, but also genuinely funny in the way that modern dumb comedies are not. I don't think I've seen Bendix do comedy before, but he's hysterical in a good-natured way.

I was not feeling any stronger, and finally realized that I hadn't eaten anything all day. I made myself breakfast and I made myself lunch, one after the other, and wolfed it all down while watching the movie, which kept going off on a new tangent just when I thought it was over. I like it when movies do that.

Eventually, TCM followed it up with another Bendix comedy, Kill The Umpire, and that was when I turned off the set and started getting on with my new job: unpacking!

This move is far from over! But anyone who has done this would know that. I wonder if anyone unpacks like me, though: I get started in one area, then something comes to light that belongs in another part of the house. I take it to where it belongs, then immediately see something that needs doing right away, get involved in that, and forget all about what I was originally doing. Shake vigorously and repeat. In the end, no one room really got done, but something got done in all the rooms, with the result that the place is really starting to shape up. It does feel and look like home now.

A dirty, messy, box-strewn version of home, but home!

And apparently, I'm not the only one who feels this way. Honey slept with me last night, all of her own volition. She left once to use the bathroom, but jumped right back into bed with me after she got herself cleaned up. I didn't have to go looking for her in the night.

Oh -- my friend Jean is doing well, and out of the hospital.