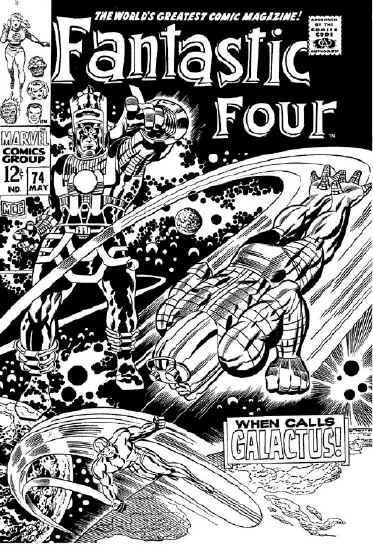 I did not start reading comics until late 1976, that is, until after I had read Faulkner and Orwell and Dickens and Twain. Even then, my preference was for Howard the Duck, Warlock, Doctor Strange and Spider-Man. I did not become an instant fan of The Fantastic Four. By that time it hadn't been "The World's Greatest Comic Magazine" for more than a hundred issues, and it wasn't until I had the chance to read the first seventy or so issues that I understood what all the fuss was about.

But I'm not here to write about Stan and Jack's greatest creation. I'm here to ask a question of the people who made Fantastic Four: Rise of the Silver Surfer, and that question is, "What does it feel like to fuck the Fantastic Four?"

I can ask that question because I watched the movie last night, on a station called FX, just to be able to say that I had sat through it, just to know that my instincts about it were right, just to give myself the moral right to dump on what I imagine is the worst comic-book movie adaptation of all time (but I haven't seen the first Fantastic Four movie, so I could be wrong).

If you look back on the sorry list of funnybook movies, including dreck like Conan the Barbarian and The Spirit, calling this one the worst is saying a lot! There are some really stinking bad films based on comic book characters out there. Few of them have pissed me off as much as this pile of cow manure.

What's right with it? OK, the Silver Surfer is a well-realized special effect. Michael Chiklis's performance (but not his make-up) as Ben Grimm is acceptable (but not great). That's as far as it goes.

Let's start with the casting. It's inept, all the way down the line. No one looks like the characters they are supposed to be playing, and they certainly don't act like them. Jessica Alba as Sue Storm? She's a Latino fer crine out loud! Sue Storm is supposed to be whiter than snow. Nothing about her is right. Not her face. Not her hair. Not her body. Not her imperceptible degree of talent.

Iouwnn Griffgdthkdth or whatever the hell his name is as Reed Richards? He's about twenty years too young for the part, and plays Reed like a Frat House boy. Even the streaks they put in his hair are wrong.

That Nobody playing the Torch? Don't even get me started.

But the worst, the nadir, is the absolute clown they have playing Victor Von Doom. Even his voice is wrong.

Oh my, and then there's the script. They are adapting, in this film, what is quite possibly the Holy Grail of comic book stories. If The Fantastic Four were Jack and Stan's greatest creation, then the Galactus Trilogy as it has come to be known is the best of the best. All the filmmakers had to do was follow the story, perhaps making a few minor adjustments to account for the absence of a character called The Watcher.

But no. They turned it into a military hunt for the Silver Surfer, and they turned Galactus into a cloud.

I would have thought that Star Trek: The Motion Picture would have taught Hollywood a very basic lesson: that clouds do not make particularly menacing villains. For one thing, they do not have brains and cannot speak.

Finally, whose idea was it to let Tim Story into the Director's Union, let alone allow him anywhere near the First Family of Comics? He doesn't have a clue about how to develop a story, let alone how to present characters and make us love them. He doesn't even know how to frame a shot. He should have the camera dropped on his fingers.

Why did I keep watching? Because, as this train wreck of a movie unfolded, I was savoring the pleasure that I would get today from throwing a pie in its face and, in the words of John Cleese, farting in its general direction.

And now, to end on a positive note: 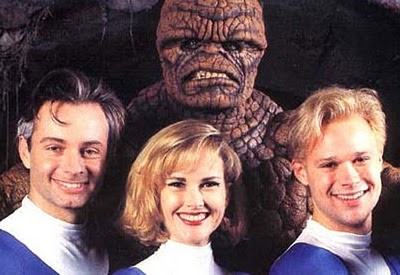 As ineffably minor as was Roger Corman's 1994 version of The Fantastic Four (that it was shot in a month for under a million dollars, and was never intended to be released, should tell you something: it was made only so that the film company could retain the rights for another few years), it looks like Shakespeare compared to the picture I saw last night. And Rebecca Staab is still the perfect actress for Sue Storm.