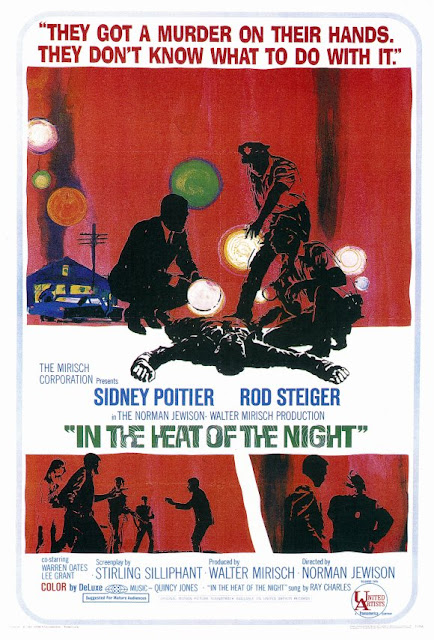 There's still so much left to do (including yet another run out to the old house tonight after work -- another storm is predicted for Tuesday and Wednesday, so it has to be tonight), but last night I reached the point where I just. . . couldn't. Couldn't unpack another box. Couldn't shelve one more book. Couldn't lug one more tote into the house. My wheels just rolled to a stop, and I collapsed into my comfy chair, and watched In the Heat of the Night on TCM from start to finish.

Of course I knew it by reputation, but I'd never seen it before. It's been on my DVD-to-buy list for years, just never got around to it. Now I don't have to!

In the end, I can't give it top marks because the murder mystery -- the plot -- ends up being so unsatisfactory. Realistic, yes, but if you've ever read Raymond Chandler or Ross MacDonald, you know that a good murder is deeply complicated and creates ripple effects that impact all the characters in the story -- even (sometimes especially) the detective. But the murder that everything hangs on In The Heat of the Night ends up being almost perfunctory: a spur-of-the-moment thing perpetrated by a low idiot who manages to take another life for no reason before the final credits roll.

All that said, the picture is well-directed in a deeply laconic style by Norman Jewison, and gorgeously photographed by the great Haskell Wexler (who also shot American Graffiti and seems to be a master at photographing cars that pass in the night).

But the reasons to watch, obviously, are the two monster performances at the core of the movie, from Poitier and Steiger, and the depictions of a racism that is so casual as to be horrifying. The movie sets you right down into the character of Mister Tibbs, in a way that I don't think any other movie had done up to that point. The man is a Gladiator, and not by choice.

It helps that Steiger's character, Gilespie, is not a cardboard cut-out nor the raging bigot that he at first appears to be. He is out-leagued and out-classed, and he knows it. . . but he's capable of learning.

On Saturday night, between rounds of unpacking during the commercials, it was The League of Extraordinary Gentlemen on American Movie Classics. First -- what's happened to AMC? They used to be a good station. They used to run movies that really are American Movie Classics. To say that League doesn't fall into that category is stating the obvious, but it doesn't end there. It seems that all AMC is showing these days is contemporary crap, including a grisly Carnivorous Zombie series that doesn't stint on the gore, even in the commercials. I expected to be glued to that station (as I am to TCM) -- instead, I mostly avoid it.

Now then: I don't think I've heard one positive review for The League of Extraordinary Gentlemen, and I'm not going to break from the pack except to say that it wasn't nearly as bad as I expected and that I've sat through lots worse (Van Helsing, anyone?). Actually, I found it vaguely diverting. Yes, it's nonsensical, yes, the CGI is shoddy. . . and Captain Nemo is an Arab? Granted, it's been a while since I read Twenty Thousand Leagues Under The Sea, and my memory may be corrupted by images of James Mason and other Anglo actors in the part, but. . . really. . . since when?

I suppose what I responded to were the vestiges of Alan Moore that remain in the film: there's a really good idea at the core of the picture, and it doesn't get completely lost amid all the action set-pieces. For that reason alone, it's smarter than its competitors. But it ultimately fails, because if you're in the business of making "Gosh-Wow" adventure movies, you'd better make certain that the audience is thinking "Gosh Wow!" as the credits roll -- and I wasn't. Guess I'm not alone in that!

Sean Connery? Eh -- they needed his star power and they got what they paid for, but Connery has been slacking and collecting his checks through a lot of half-hearted performances lately.