Introducing the Quats of the Duck House, Part II 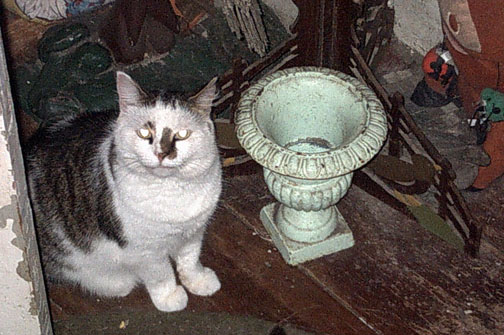 When my boss saw pictures of Whitey, she said "Next time you name a cat 'Whitey' make sure it's actually white."

But Whitey is named for a character on Leave it to Beaver, not for his color.

He showed up one day in our yard, so people-friendly that he followed us everywhere -- so obviously, someone dumped him.

It's their loss. Whitey is the sweetest cat with the best disposition ever. He doesn't do bad things. Oh, he loves to play and would like the other Quats to share that enthusiasm, but he never ever fights, even when Patches is batting him in the face because she doesn't want to play with him, or share my lap.

He is the smartest cat I ever knew. In the early days, when he was following us around absolutely everywhere outside and I was afraid that he would go under the car and get his damn self killed, I would make a firm STOP sign with my hand and say out loud "Stop." -- and he learned right away what that meant and he obeyed just like a dog.

But in those days he would fight with the other outside cats, or they would fight with him and he would not back down. He was always getting wounded. One day when we came out to feed them, we found Whitey so badly wounded (with a deep, bloody gash down the back of his neck) that it was clear to us he would die if we didn't do anything.

Mom was determined to save him. We took him to the vet and they sewed him up, kept him for a week pumping in fluids, etc. When he came home he came into the house, and that is where he has been ever since. You can still feel the raised scar under his fur where he was hurt.

He is so affectionate, always bumping me in the leg and wanting to be picked up and hugged. In later life, he has developed a curiosity about shadows, and when the lights come on in the evenings he follows me all around the house, boxing my shadow on the floors and walls, whipping his tail around happily.

About a year before Mom's death, I came into the kitchen one morning and found Whitey very sick and sad, obviously in pain, drooling a foul ooze from his mouth. We took him to the vet again, and she discovered that his teeth, all of them, were very badly abscessed and would have to come out. All of them. The operation itself turned out to be much less expensive than quoted, because his teeth were so bad and came out so easily.

Whitey did not mind the loss of his toofies at all, and in fact began to eat a lot better once the pain was gone. He was always sleek and svelte before, but since his toofies were pulled he has gotten notably tubbier! He likes to eat turkey and chicken with Honey, and to sit on my lap at night. With Honey behaving much less territorially about the upstairs than she did in the old house, he has even started sleeping with me.