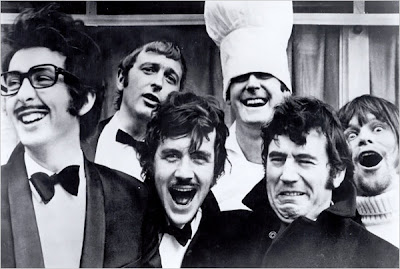 I seem to be using much of my recent DVD time in re-visiting Olde Friendes. This past Sunday, as a preface to the series, I put on Life of Python, the 30th Anniversary Reunion show that they made in 1999. The date gave me a shock; it means that the thirtieth anniversary was more than ten years ago, and The Flying Circus is now forty-two years old!

. . . and Grahame Chapman has been dead a long time.

It also strikes me (although I must have known this at some point) that Python didn't hit in the USA until several years after the show had gone off the air in Britain.

My first exposure to the Pythons was on the summer replacement series for The Dean Martin Show, produced by Martin's company and hosted by Barbara Feldon of Get Smart! fame. I'm not sure about this, but it must have been the summer of 1973, one of the first summers that our family spent in the old house.

The summer series that year was devoted to British comedy, and Monty Python's Flying Circus was not the only featured show. The great Marty Feldman also had a series at the time; his format was similar to the stand alone two-reel comedies of Laurel and Hardy or The Three Stooges: a different, stand-alone situation every week, often in the style of silent comedies. His shows were every bit as brilliant as what the Pythons were doing, yet I've never seen them since.

On those cool summer nights I would lie on the floor in front of the television and literally roll around in laughter. I would have been about fourteen or fifteen years old, and probably did not know the meaning of the word anarchic, although I was learning the definition just by watching. Once in a while, something comes along down the cultural pipeline that doesn't just connect with you, it splices itself to your DNA and warps you for life. Such a show was the late Patrick McGoohan's The Prisoner, and such were the shows that I was introduced to that year on the Dean Martin Summer Replacement Show. Thank you, Mr. Martin!

If the reunion that I watched on Sunday night wasn't quite the genetic-splicing thing that it commemorated, still it's good to see the boys working together again and giving it the old college try. I would guess that they've put together about fifteen to twenty minutes of new material, which is used as a shell around a full-length documentary about the show and its origins, hosted by Eddie Izzard (who, try though he may, isn't remotely funny: just weird), followed by a Michael Palin-style Travelogue, hosted, oddly enough, by Michael Palin, about the locations where the show was shot, and a brief segment hosted by Meat Loaf about the Python recordings. Throughout, a forceful BBC chat-show host advertises a gathering of all the surviving Pythons on his stage. This turns out to be the final joke, and a good one.

Much of the new material is a re-working or re-combination of bits that seem familiar, grafts from earlier work, and if there's any real disappointment in the show, it's simply that the Python's haven't come up with anything powerfully new, but instead seem to be imitating themselves. That's all right. I suspect this was just a lark for them, a chance to celebrate their own success, work together again and raise a glass to the halcyon days. They're entitled to it.

There was one later reunion that I'm aware of: a still photo that appeared in GQ magazine a while back. I have it hanging on my closet door. It's a shot taken from above, of all the Pythons, in character, more or less lying in their coffins. Except Terry Jones has a naked lady with him in his, and they're all interacting with each other in very funny ways. Even Graham Chapman was there for this reunion: Terry Gilliam is leaning half-out of his coffin, sweeping Chapman's spilled ashes into a vase.