Last night was a watershed of Renaissance at my place! About a week ago I had the same experience that I'd had earlier with Melanie, that is, remembering that I'd forgotten. Again, I hadn't listened to their music in years and years -- again, because I have it all on vinyl but nothing to play it on. Again, I hopped on line and ordered up some CDs. Last night they arrived. . . but I also had a nice surprise from my friend BC (more on him in a moment), who sent me not one, but four other albums from the band, albums that I never owned! BC is a danged nice guy when he isn't hammering me about calendars ("That's, ah say that's a joke, son!").

I went from zero to eight in about ten seconds!

I even turned off the PBS News Hour so I could instead listen to Annie and the boys while my dinner cooked. It felt like coming back to life after a decade-long sleep.

I started with Ashes Are Burning, an early effort from the reconstituted second group, and found that it had some additional music beyond the vinyl version. When the group sang "We all are atanding unafraid | On the Frontier" I had that same thrill of recognition that comes with rediscovery. It's a great feeling.

Y'know, even English Muffins are better when you haven't eaten them in a long time. Not that that has anything to do with music.

What used to be side one (do you remember the days when records had sides?) is good, but what used to be side two is great, with the perky ballad "Carpet of the Sun," the mourning, minor-keyed "At the Harbour" and the long title track. I played "Carpet" twice and sang right along with Annie. It's been years since I sang along with a recording. We sounded great!


Come along with me
Down into the world of seeing
Come and you'll be free
Take the time to find the feeling
See everything on it's own
And you'll find you know the way
And you'll know the things you're shown
Owe everything to the day
Later in the evening, I put on A Song for All Seasons, one of my favorites of theirs. It's a completely unified album, with a fanfare, overture and finale, but the individual songs are wonderful, too. Chief among these are "The Paper Lads," a theme song the group did for a British TV show that I'd love to see someday, and "Northern Lights," a real upbeat, Romantic piece.


Destination outward bound
I turn to see the Northern Lights behind the wing
Horizons seem to beckon me
Learned how to cry to young, now I live to sing
The Northern Lights are in my eyes
They guide me back to you
Renaissance have been labeled "progressive rock," but that's a meaningless term that tells you nothing about what their music is like. Their work has a strong vein of Classicism running through it, along with other sorts of "isms" -- Romanticism, Positivism, and a good dose of musical theatricality. Their lead vocalist, Annie Haslam, is not a great singer, but she is the perfect voice for the kind of music the band creates: clear, upbeat and expressive.
On many of the albums a full orchestra backs the group up, but don't let that fool you: Renaissance were no studio band, they could do it live and did so frequently, with Annie often vocalizing the orchestral parts to great effect.
Falling around me lay, parts of my life
I'm leaving them all behind
We leave with the night
Living in strange ways
Has cast me aside
I cry in another world now
I must search for all my days gone by
I first heard them on a PBS radio show called, if I remember correctly, The BBC Rock Hour. This was just such a live performance. I tuned in late, and so did not know anything of what I was hearing, only that I liked it. I quickly slapped a cassette tape into the radio and recorded the rest of the hour. It was only then that I learned the group's name. I wore that cassette tape out over time, and tracked down my first Renaissance album (Novella) at a now-defunct record chain called DeOrsey's.
Sold, said the man to the many
Work for me -- I'll only steal your time.
Quarter time for treble days
The only way to sell your soul
Midas Man
Midas Man
Most of the time, it's my friends who introduce me to bands or singers. But this time, this one time, I was able to go to my friend BC and introduce him to the group. I think he became as big a fan as I was. That's how he came to have all those Live CDs that he sent to me. He's being the opposite of Luddite me, though, and burning all his CDs onto his Ipod. That's how come he doesn't need them anymore.
Thank you, BC! I will give them a good home!
Now then, speaking of Annie. . . 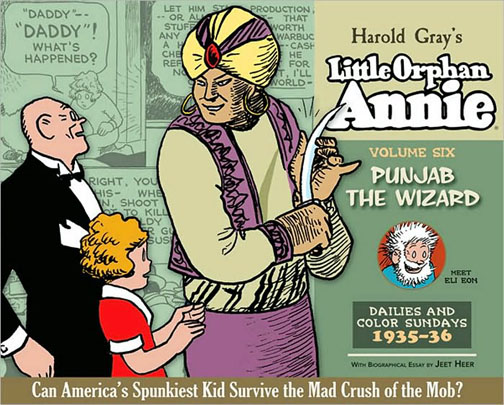 My friend BC is the Associate Editor at The Library of American Comics, and also in the package was the latest volume of their spectacular hardcover reprint of Harold Gray's Little Orphan Annie. I told you he was a danged nice guy!
The Library of American Comics is reprinting, in archival quality and often for the first time, the great classics of American Newspaper Comic Strips from Dick Tracy and Terry and The Pirates to Blondie and Bloom County. After the delightful King Aroo, my second favorite is Little Orphan Annie, a sprawling Depression-era fable about a kid with nothing but spunk, grit, determination and a great dog. Each volume in the series contains approximately 1,000 daily strips (most shot from the original syndicate proofs), nine complete stories. The Sunday strips are reprinted in gloriously restored color. BC writes most of the scholarly and entertaining introductions to these volumes (including an "introduction" to the work of Noel Sickles that could fill a book by itself!), but the Annie supplementary material is written by Jeet Heer. These beautiful volumes belong on the shelves of anyone who takes “graphic novels” (I still call ’em comics) seriously.
'Nuff said! as Stan Lee used to say. . .
-- Freder.
Posted by Freder at 2:00 PM