A Boy and His Horsey 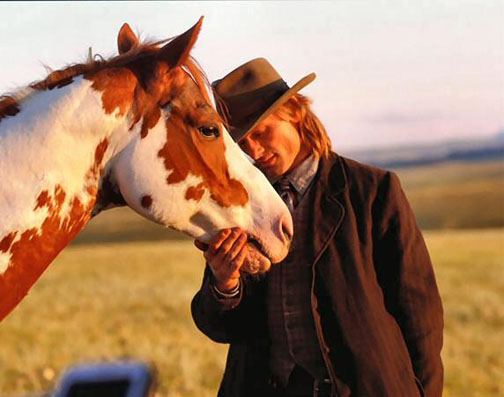 After his success in The Lord of the Rings, Viggo Mortensen became one of those actors I would go out of my way to see -- except that he keeps working in pictures that are too violent for me. Hidalgo is one of the exceptions; but reviews from both the critics and my friends were so mixed that I ended up passing on it. Last night it ran on AMC, and I didn't feel like working, so in a "What the hell?" moment I sat down to watch.

And I'm quite mixed on it myself. For most of its run time I thought it was great fun, and regretted not getting the DVD while my mother was alive. She loved Westerns (we watched a lot of John Wayne pictures in the last five years of her life) and she loved Lawrence of Arabia, and this is a funky combination of the two, what's not to like?

I'm not saying that the craftsmanship is anywhere near that of Lawrence, but it's very serviceable, one of Joe Johnston's better efforts, certainly better than his lamentable remake of The Wolf Man. And here we have Omar Sharif fully back in the saddle again, in full Omar Mode, turning in another very strong performance. We have the great J. K. Simmons as Buffalo Bill, and we have Hidalgo himself, yet another terrific actor of the horsey persuasion, flying like the wind across the desert sands. Cowboys and Indians and Arabs. You can't get much more exotic than that.

The CGI sandstorm didn't thrill me so much, it's hard to get excited about unconvincing digital creations. They carry no weight. But it didn't actually spoil the film for me.

What did spoil the film was yet another gross violation of Mark Twain's rules, specifically, "Crass stupidities shall not be played upon the reader by either the author or the people in the tale."

And -- if there are any horsey people reading this, maybe they can tell me that I'm wrong, but it seems to me that no animal could sustain the wounds that Hidalgo is shown to sustain near the end of this picture and hope to walk again anytime soon, let alone run like The Flash and overtake two other healthier horses with a substantial lead.

If you haven't seen the picture -- what happens to this poor animal is bad! I yelped out loud when I saw it. Graphic violence against humans is bad enough, but when it's shown happening to an animal I leave the room.


In a nutshell: instead of showing us the real consequences of a violent attack upon man and animal, and the even more difficult-to-watch means by which Viggo is shown to extricate Hidalgo, the movie glosses right on over it and sails on to a typical Hollywood Ending. Ghost Dancers flit across the sand. Mumbo-Jumbo is heard. One minute Viggo's ready to put a bullet into Hidalgo's head, and the next -- "A miracle happened! I'm well!" It's typical Spielbergian manipulative hokum. It shows, once again, how little respect the Hollywood Machine has for its audience.

As my friend BC once said, "If it were a book you'd throw it across the room and say, 'I sat through the whole thing -- for that?!'"

It's too bad. Hidalgo is a heckova nice horsey and the picture about him was purring comfortably along, a well-oiled machine, until it hit one of Twain's Crass Stupidities at high speed.