So Much Hot Air 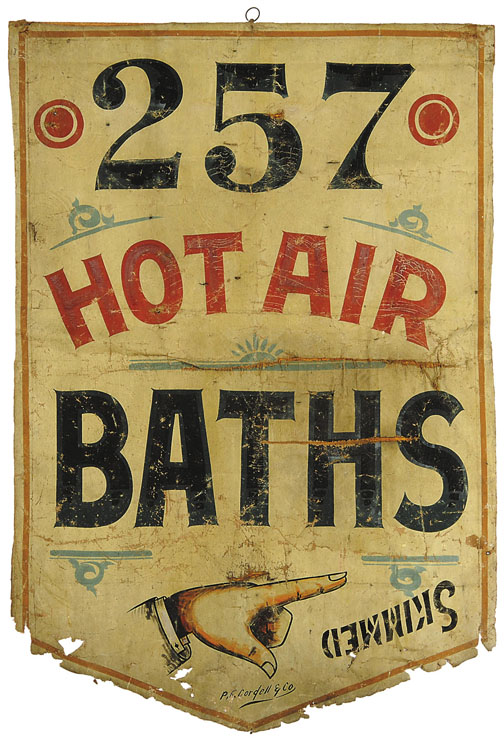 Yesterday the CD-ROM arrived from the auction house containing every photograph that they took of the the things from my mother's house (at least, the things that were in the second auction just recently). The banner pictured above used to hang on the back stairway leading up to the guest suite. This was a part of the house that was once used quite often, was closed only in winter, but which in recent years had been completely shut off. It was one of the areas of the house that acted a bit like a time capsule: on the rare occasions I ventured in there, the back staircase felt a bit like an abandoned storage room in a museum.

I plan on using the photographs, which are beautiful, in an array of creative projects. I'm especially looking forward to an additional CD-ROM of pictures from the upcoming Toy and Collectibles auction. There is a children's story that I wrote years ago, based on Mom's collection of toys and dolls. At the time, I was just learning how to use a computer and programs like Photoshop, and my efforts at generating electronic illustrations were crude at best. Now I have some experience, and Creative Suits CS5, and I plan on putting them both to use.

One of the very few items of real value that I kept out of the auction was the star of that story. He is sitting upstairs in the studio right now. I will need more photos of him than the auction house would be able to provide.

The first line of the story is: "The bear was lonely, and his socks didn't fit."

Also yesterday, I had the first "bad morning" that I've experienced in a while. What brought it on, I wonder? Too little sleep, a hangover from the night before, both? When I came down to the kitchen a wave of sadness hit me, followed by the familiar claw of anxiety.

But -- it wasn't as bad as some of the bad mornings I experienced at the old house, and today I was the almost perky, practically OK person that is becoming the new normal.

It's been a peaceful week here. I've been Taking Deep Breaths. With the move behind me, a layer of stress is dropping away and the World That Was is getting smaller and smaller in the rear-view mirror.

It's still a part of me. I just don't live there anymore, and where I am living is so full of possibilities that I'm still just looking around.

I love the new house, and think that the basic layout of the furnishings worked out really well. The cats appear to agree with me. It's home now. Everybody's stretching.

Being able to write this blog from home is a danged good thing, too. It's both a daily task and a challenge. Getting into the habit of writing something, anything, every night is exactly what I need. It won't always be the blog. I hope that, sooner rather than later, I'll be able to find it in me to work on other projects.


Here's the soundtrack for this post.
There was a brief rearing of the past last night. The new owner of the house called. He wants the keys that I left with my lawyer, and he has questions about the things that were left behind. I understand his concerns, but I can't really help him. That part of my life is over. He needs to deal with the lawyer, or with my sister, who after all is the one who sold him the place right out from underneath me. It's time for her to step up to the plate, and do her part, and have her closure, if she wants it. I am done.


*
This evening over dinner I watched the animated "film," 9. I have to use the quotations for a couple of reasons. First, no film was harmed (or even touched) in the making of this motion picture. Second, as a movie it could be a great video game. Could, because as it stands, it doesn't even have the value of a video game, the interaction or the solving of puzzles. Even for a modern CGI animated movie, the "plot" is astonishingly thin. Why did they bother to hire such great voice talent when there is so very little dialogue in the picture, and most of what dialogue there is consists of grunts, wails and moans?

Literally, the plot is nothing more than an explanation for the graphic design. And, yes, the design is wonderful, but you know what? Wonderful design is everywhere these days. There's a surfeit of it, and I say that as a designer myself.

Literally, if you've seen the trailer for this movie, you've seen everything that it has to offer and then some. I'm glad that I was eating my dinner while it was on, so that I could say it wasn't completely wasted time.

I'm on my bike. Fiddle-dee-dee, tomorrow is another day.