Sunrise over Wings, or, "All Hail TCM!" 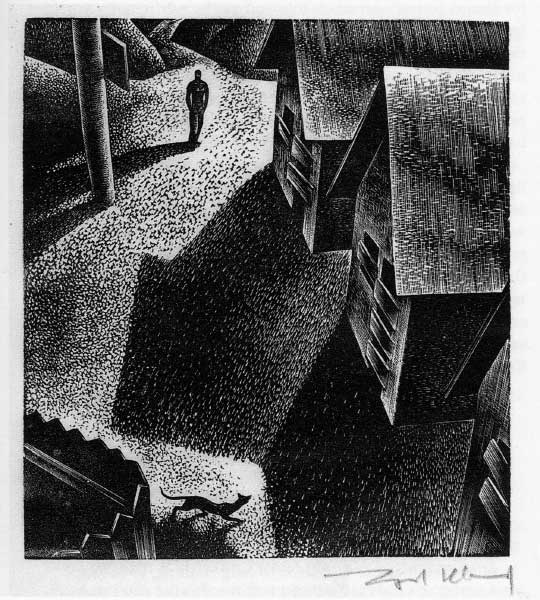 Last night thanks to TCM I had a silent double feature of F. W. Murnau's Sunrise and Wings, starring Clara Bow -- both of them pictures I'd never had the chance to see before, although I've had a repro of the Wings lobby card hanging on my wall for years. The two films are wildly dissimilar, yet both are remarkable.

Sunrise is easily the most visually striking picture I've seen in a long, long time. It makes me want to grab modern filmmakers by the shoulders and force them into a chair, like Malcolm McDowell in A Clockwork Orange, and say to them "See?! See?! This is how you frame a shot!! This is how you tell a story!"

With Murnau at the helm, it's hard to believe that this is an American movie. In most ways, it's as Germanic as they come. The visual style of Sunrise reminds me profoundly of the woodcut novels of Lynd Ward (which is why I've used an image from one of them above, instead of a poster or still from the movie). Every single shot is composed to the nth degree: one of my favorite scenes comes early in the picture, and it's nothing but two people in a rowboat on the water, but the image is laden with menace as the husband, shoulders hunched, looms over his cowering wife in the stern.

Unfortunately, the story is slim, and it's drawn out over an interminable runtime of an hour and forty minutes. Already by 1927, audiences were demanding more in the way of content than what this delivers, which explains why it failed at the box office. It's too bad. From the evidence of Sunrise, Murnau and Hollywood could have been a great combination. But this is a lesson that filmmakers still don't seem to have learned: pay more attention to the scenario, please!

The same can be said of Wings, though that's about the only thing the two pictures have in common. Yes, Wings is also remarkably filmed, and filled with striking imagery, but even though much of it is set (and shot on location) in Europe, there's nothing European about its brand of visual style: it's about as all-American as a movie can get. 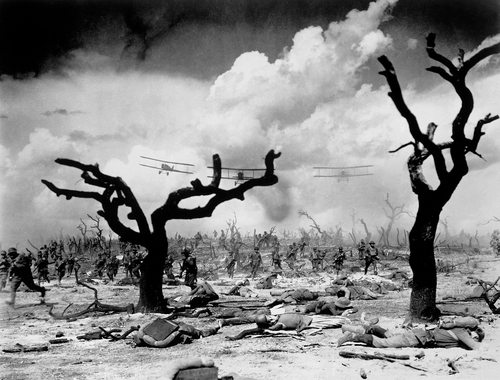 The battle scenes, both in the air and on the ground, are state-of-the-art, and are still as good as anything that's been done since. Compare them with the work in Jean-Pierre Jeunet's A Very Long Engagement (which is a wonderful film, by the way -- I like it at least as well as Amelie), it's every bit as powerful.

As a piece of propaganda, Wings is as fervent as they come, but again the scenario is too simplistic: the age old "girl loves boy, boy loves some other girl, other girl loves other boy" thing. This probably wasn't as tired in 1927 as is today. It doesn't help that the male leads are not very charismatic -- about the only thing they have going for them, imho, is that they obviously did a lot of their own flying.

Beyond the battle scenes, the film's one special effect is Clara Bow. Before Wings, I knew her only from still photographs and reputation. So, once again I got to discover why things are as they are, why Clara Bow was called the "It" girl.

She doesn't just light up the screen, she throws herself at it, and it doesn't matter that she gives us a big, big scenery-chewing performance, because there's a genuineness about her: when her eyes cloud with tears, it's not glycerin. Like the performance Brigette Helm gives in Metropolis, this is grand opera, larger than life but pure and focused. In an early scene shot from underneath the Shooting Star, a blazing hot-rod being rebuilt by one of the male leads, she gets down on our level and works the camera for all she's worth, kicking her legs violently in the background as if she was trying to swim under the vehicle and join us. This is the girl next door? How could Charles Rogers possibly be interested in the out-of-town gal when he's got Clara Bow in the seat beside him? The other girl is a wet rag by comparison.

When Ms. Bow dons the uniform and joins the boys overseas, her image is almost overpoweringly iconic, yet she still chases after the same dippy guy. I guess that's part of what makes her All-American: like Horton the Elephant, she is faithful, one hundred percent!

What a nifty double feature, filling in two gaps in my experience at one blow. Thanks, TCM!
Posted by Freder at 12:34 PM