The House that Was 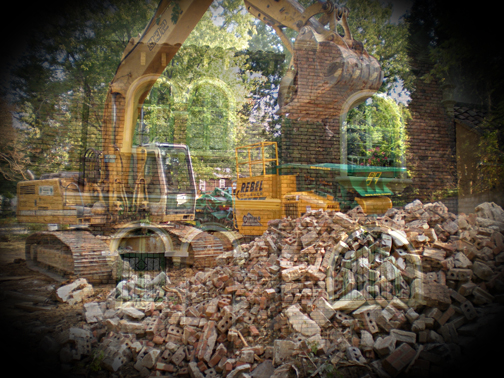 In yesterday's post I mentioned some tiles. They are heavy floor tiles in a green and white checkerbox pattern. I didn't mention that there are several beautifully carved, moss-covered bricks and stone finials of various sizes and shapes that I also intend to bring with me.

And thereby hangs a tale.

I was very, very small when our family lived in St. Paul, Minnesota. Not more than three years old. So my involvement in the story is limited to a specific memory that has stayed with me all my life. We'll get to that.

A very short drive from where we lived, there was a beautiful house being offered for sale. It was built from European brick in a European style, not an old house but one built from old materials, designed to look old. The owners had traveled all over the world, and wherever they went they bought materials for their home: English stone, Italian brick, Mexican floor tiles; they even bought antique bathroom fixtures and restored them. I cannot give you accurate details about this, only my impressions based on what I was told a long time ago.

Now the owner was a widower, and either the house was too much for him alone, or he wanted to escape the memories. But he still loved the place, and he showed its features off to my parents with genuine and justified pride.

My parents, being the people they were, thought that the house was wonderful and wanted to buy it. They made an offer.

Here is where my memory comes into play. One day, my parents drove us all out a short way to what was, for me, a strange and fascinating location. We made a left turn off the main road into a heavily wooded drive. At the end, it opened out onto what looked like an archeological dig. Whatever had been there was gone. The ground was torn up and turned over. Gravel and rock mixed with dirt and brick, mortar, stone and broken bits of tile.

My mother, father, sister and I all walked our separate ways across the wreckage, pulling out bits of checkered tile, beautifully carved old bricks, broken stone finials, and more. It was very much like a treasure hunt to me. I knew nothing of the backstory.

The town of St. Paul had also made an offer to the owner of the house that was. It was no more than about five thousand dollars more than what my parents had offered, but he accepted it.

They immediately tore the house down to make room for a highway expansion.

My family picked the bits and pieces that we liked from the ruins, and brought them home with us. Over the years, in every home we've lived in, they have served various, mostly ornamental functions. For the last couple of decades, most of the pieces have adorned the stone patio just outside the back kitchen door.

I managed to move some of them to my new house before the snow flew, but at the moment they are buried in the front yard, under about three feet of the stuff.