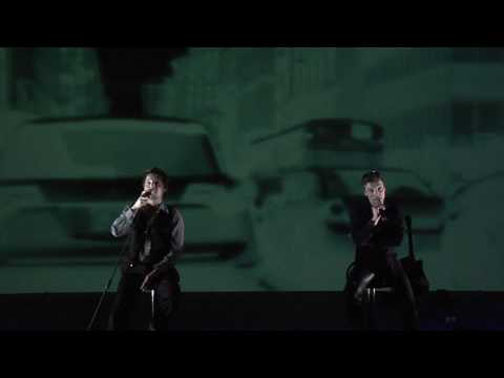 Songs for Drella, a musical piece by Lou Reed and John Cale, is an internalized, introspective look at the life of Andy Warhol. It is billed as being entirely fictitious, and insofar as it tries to represent the thoughts and feelings of Warhol himself, that must be true.

But where it reflects the vagaries, the trials and the conflictedness of Reed and Cale's longtime personal and professional association with Warhol, Songs for Drella takes  on the weight of reality. Quoth Reed:


No matter what I did it never seemed enough
He said I was lazy, I said I was young
He said "How many songs did you write?"
I'd written zero, I lied and said ten
"You won't be young forever.
"You should have written fifteen.
"It's work. The most important thing is work."
Whether or not this exchange actually took place, it still rings true, and carries with it a lashing bite for anyone involved in the creative trade. Reed and Cale paint an ethical side of Warhol that's rarely discussed by people who didn't know him.

You expect interesting things from Reed and Cale; you expect complexity in the writing of both music and lyrics, but in Songs for Drella the pair deliver something that I don't believe they are much known for: emotional complexity. The piece chronicles a difficult relationship, one where mutual respect exists but accord cannot be reached, one where misunderstanding often rears its head, and love and honor come with the price of regret.


I really miss you,
I really miss your mind
I haven't heard ideas like that in such a long, long time
I loved to watch you work and watch you paint
But when I saw you last, I turned away
Here's the soundtrack for tonight's post.
Reed is thoughtful and hard-driving musically, while Cale is thoughtful and melodic. The two work together like a precision timepiece. Middle age has caused them to look backward with candor -- about Warhol, and about themselves.


They really hated you, now all that's changed
But I have some resentments that can never be unmade
You hit me where it hurt, I didn't laugh
Your diaries are not a worthy epitaph
You need not be an admirer of Mr. Warhol to find something in this work that you will recognize in yourself, perhaps painfully. While Songs for Drella makes as eloquent a case as any for the value of Warhol's contribution, it goes much farther than that.

To Middle America, Warhol was the equivalent of a Space Alien, remote and unknowable. By writing about the fragility of life and friendship, Reed and Cale bring Warhol down to Earth, and humanize him for the first time.